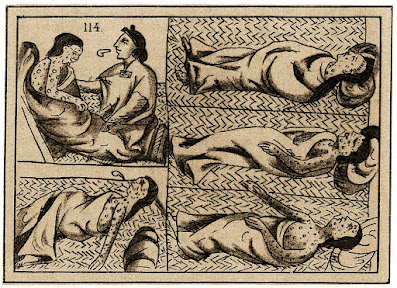 A DEPICTION OF SMALLPOX
In the 1500s

In 1856, a smallpox epidemic on Guam erupted, killing half of the island's population. I have a blog post on it here : http://paleric.blogspot.com/2012/02/today-in-history_27.html

But in this post I want to show the numbers. Just how much the population declined due to the epidemic.

These figures come from the missionaries on Guam. They, in turn, could have gotten them from the government but they also could have gotten these statistics on their own, as they kept records of baptisms and deaths. In fact, there were no "birth certificates" at the time. People had to get their baptismal certificate from the priest to show proof of birth and parentage, since everyone at the time was Catholic and everyone got baptized.

The missionaries reported how many people lived in the capital city and the outlying villages the year before the epidemic, and how many died the year of the epidemic. Many things "killed" people in 1856; old age, accidents, other diseases. Not every death, therefore, can be attributed to the smallpox but the large majority could be because if a village had 10 deaths in 1855 but in 1856 had 150 deaths, something unusual must have happened in 1856.

For Hagåtña, included in the numbers were people from Aniguak, Sinajaña, Mongmong, Asan and Tepungan (which later became Piti in American times) because these villages were all considered districts of the capital city. They didn't even have their own priest; the priest of Hagåtña had care over them.

But the differences are not drastic. They mostly hover around 8000 people at the time of the epidemic, and 4000 after the epidemic, or a 50% reduction in population. Half of Guam - gone in a year!

SMALLPOX NOT THE ONLY KILLER

Newspapers in 1857 reported that there was starvation on Guam at the time. It makes sense. If people were dying left and right from smallpox, it means that there were far less people to tend the farms and crops died. Thus, there must have been a food shortage on Guam following on the heels of the epidemic.

A WHOLE VILLAGE CLOSED DOWN
It's interesting that Malesso' and Inalåhan were devastated by the epidemic worse than Pågo, if the missionaries' numbers are right, but it was Pågo that the Spaniards closed down, not those two southern villages. I suppose the difference was the fact that Pågo was closer to Hagåtña and the people didn't have to travel far to move there and to Sinajaña where a number of Pågo people transferred. But to close down the southernmost villages of Guam and transfer the survivors north would have been too drastic a change for them. 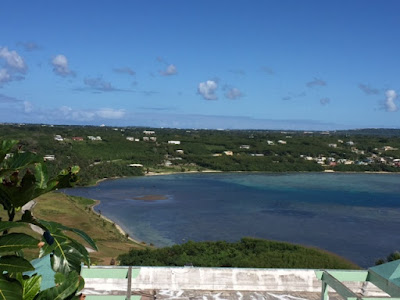 BYE BYE PÅGO VILLAGE
Closed after the Smallpox Epidemic of 1856