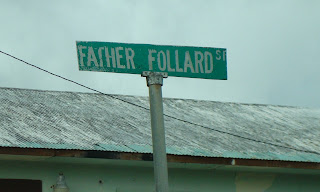 Why is one the central streets in Hågat named after a priest we don't hear about?

If you're an old-timer in Hågat, you did hear of Father Follard.  He may have baptized you; or officiated at your wedding.

Follard was one of the many Catholic military chaplains who went beyond the call of duty and helped the local people as much as possible, not just the guys in uniform, which was their essential obligation.

When the Americans occupied Guam again in 1944, there was ONE Catholic priest left on island - Father Oscar Lujan Calvo.  Father Dueñas had been beheaded just before the liberation.

If it weren't for these military chaplains, poor Father Calvo would have been unable to handle it all himself.  There were about 20,000 Chamorros on Guam at the time.

More than any other chaplain, Follard became quite involved in the civilian population's needs and concerns.  As a sign of this close relationship, the people of Hågat had a main street named for him. 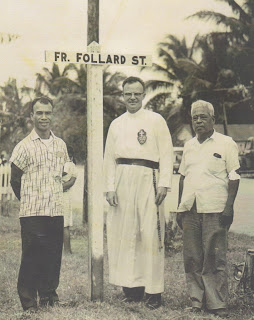 Father Follard in front of the original (wooden) street sign.
Posted by paleric at 1:36 PM