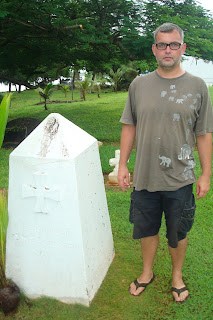 
This German visitor, after seeing what is left of the buildings and structures built by the Spanish (Malesso' konbento), pre-war Americans (Merlyn G. Cook School) and even Japanese (some pillbox gun placements), asked me if there were any German remains on Guam.

I think he was expecting a building, but instead I took him to the Navy cemetery in Hagåtña where the skeletal remains of German sailors are buried - sailors who died in the scuttling of the HMS Cormoran ship in Apra Harbor when America declared war on Germany in 1917.

I don't think he was aware that Guam was never part of the German colonies.  Saipan and Rota were, but not Guam.
Posted by paleric at 12:05 AM