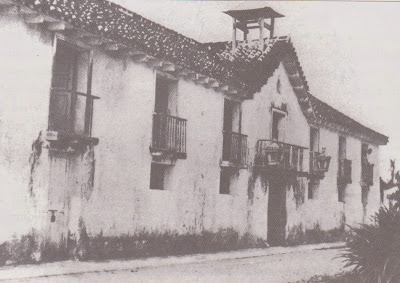 The Tribunal, or court house, in prewar Hagåtña


Just how tailaye (wicked) were people living in Guam a hundred years ago?

We have the court records to give us some indication.

In a one-month period in 1915, the following cases were tried in the Island Court :


This is such a forgotten custom that I rarely ever hear it in Guam or the other Mariana islands.

Yet, I heard it in California!

At the Guam clubhouse, at the start of a nobena.

The techa (prayer leader) is saying, "A resåt. Maila' ya ta fan nobena." "Let us pray. Let us pray the novena."

The phrase "A resåt" is borrowed from the Spanish "A rezar," which means "To prayer," or "Let us pray."

It's like a verbal bell to tell the people to quiet down and compose themselves for prayer.

In the old days, this meant people were to stop talking and to kneel down.

REZAR
(Spanish for "to pray")

Another lady at a rosary calls out "A RESÅT!"


One more time, at another nobena.

Posted by paleric at 3:30 AM No comments: 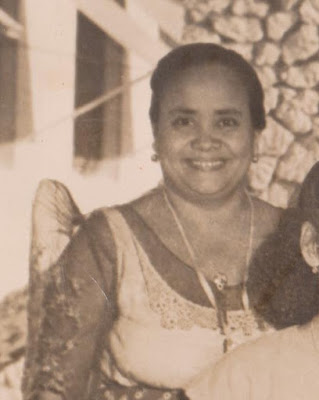 
She was one of the most popular techa in all of Guam.

Tan Chong was the daughter of José Garrido Mendiola (Gutos) and María Delgado Salas. The family lived in the Santa Cruz district of Hagåtña before the war.

Her mother, María, was also a techa before her, and undoubtedly Tan Chong got her start from her mother. But her real career as a techa took off in a most humorous way.

As an eleven year old child, Tan Chong would sit behind the techa in Santa Cruz church, looking over her shoulder and would read aloud the nobena along with the techa. But Tan Chong was so good and so fast in doing this that she soon overtook the techa, who was a few paces behind the little girl Tan Chong.

In exasperation, the techa turned around and said to Tan Chong, "Hu! Chule' ya hågo un tucha!" ("Here! Take the book and lead it yourself!")

And Tan Chong did! Since then, she was a techa in the church and in many homes.

...a good singer as well. Not every techa is a singer. Some, in fact, let others lead in singing the Chamorro hymns and they stick to leading the recited prayers. But quite a few also sing as well as lead in the prayers.

A techa is specifically a prayer leader. A singer is a kantot (if a male) or a kantora (if a female).

NOT ONLY CHAMORRO BUT...

...in Spanish as well. Tan Chong was from that generation that grew up saying many prayers in Spanish. She also knew Spanish hymns.

WHAT MAKES A GOOD TECHA

Tan Chong was liked as a techa because she was loud enough, clear enough and had the right speed, neither too slow nor too fast. When she lead the prayers, people could understand her, follow her and pray with her.

Tan Chong was the first techa of the new Saint Jude parish in Sinajaña after the war, with Tan Maria'n Songsong and Tan Catalina'n Gido. She wasn't one of the daily techa who lead prayers before Mass, but was rather the kind of techa called by families to their houses.

Påle' Skåt (Fr Oscar Calvo, later Monsignor) was first in Sinajaña then moved to Agaña Heights next door. Tan Chong became a regular member of Påle' Skåt's religious circle and was also a main figure in the Agaña Heights parish as a techa and teacher in Eskuelan Pale'. She was also close to his sisters and other women devotees.

One of the Agaña Heights Sodality members (an association for the young girls) always knelt next to her when she lead the prayers so that they could learn from Tan Chong how to lead prayers. 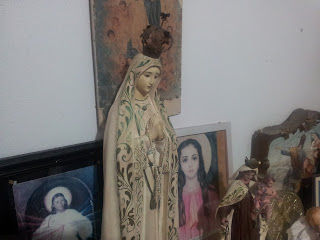 Påle' Skåt gave this image of Our Lady of Fatima to Tan Chong to take from house to house, leading the hosting family in prayer.

Families often show their appreciation to the techa by giving them money or food, all unsolicited.

Tan Chong lived in a wooden house in Sinajaña and would just put the money, all crumpled up, in any nook or cranny in the walls of the house. Family members cleaning the house would find the rolled up bills in cracks in the wood here and there. She would sometimes give the money to family members to buy whatever was needed.

When families would give her food instead, she would share it with the family, who lived in various houses in the neighborhood. Instead of telephoning or yelling, she would bang on an empty oxygen tank to call their attention.

If it was to call the chickens to eat leftovers, she would bang the same tank but with a different rhythm meant just for the chickens.

Posted by paleric at 7:46 AM No comments:

Email ThisBlogThis!Share to TwitterShare to FacebookShare to Pinterest
Labels: Taotao/People

The castle is the castle of the wise man;
but when the bear comes
the wise man is chased out of his castle.

What they lacked in classroom education was made up for in folk wisdom passed down orally from elder to child.

The above statement was taught to a lady by her mother who learned it from her mother. This is something that goes back to the late 1800s and perhaps even earlier.

Our islands don't even have bears, yet our mañaina knew something about them because Spaniards obviously talked about them and described them to our elders.

There were more than one moral lesson to be learned from such quotes as the above.

A man may be wise, but none of us are invincible. Even the wise man can be defeated by a bear. Every Goliath has a David, and so on.

So even if you live in a hut, and envy the castle, remember that even those who dwell in castles can be chased out of them.