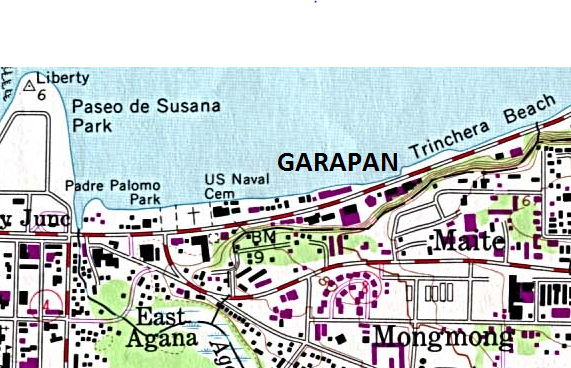 We've all heard of Garapan in Saipan. But on Guam?

Yes. But ever since nearly everyone moved out of war-devastated Hagåtña after World War II, people forgot that there was a small section of the city that was called Garapan.

It was located east of the Protestant, or Baptist, cemetery, formally known as the Custino Cemetery. This cemetery is unknown by many, as it lays mostly hidden from view. It is across the street from the better-seen Naval Cemetery.

Tony LG Ramirez confirmed this for me some time ago, but this elderly man, who lived in San Antonio as a child, the barrio where Garapan was located, also confirmed it for me. 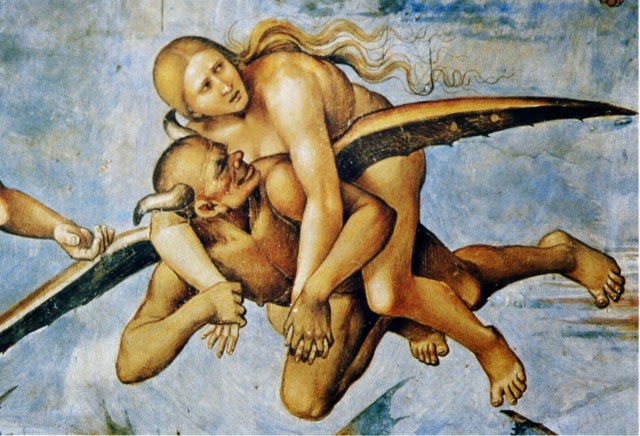 
ya ha hungok i sentensian Jesukristo ni i yinegguan (2) uhe (3) na ånte na måtai yan må'gas na isao.
(and she heard the sentence of Jesus Christ of condemnation of that soul which died in mortal sin.)


na tåya' håf na nina' libre giya sasalåguan?"
(that there is no escape from hell?")


Guåho, ni i Yu'us yo', sen hu tutungo' na i taotao iningak (4) ni i tinailaye desde i pinatgon-ña,
(I, who am God, know very well that man is inclined to evil from his childhood,)


ya muna' ennao na tiningo'-ho hu po'lo gi iyo-ko iglesia
(and because of that knowledge, I instituted in my Church)


i sakramenton kumonfesat para u ma na' funas todo i isao siha.
(the sacrament of confession for the wiping away of all sin.)


ti ha aprobecha i tiempo ni i hu nå'e gue' para u dingo i chat (5) na bidå-ña ya u gef konfesat;
(he didn't take advantage of the time I gave him to forsake his evil ways and confess well;)


måtai på'go ya hu na' ma yoggua muna' i deskuidå-ña (6) yan i ma abandonå-ña."
(he has died now and I condemned him because of his carelessness and forsakenness.")

(1) Monha = from the Spanish word monja or "nun." Nuns are different than sisters in that nuns are cloisetered; they do not leave the convent. We are more used to sisters here in the Marianas, who teach and do other works. For us, a religious sister is etmåna, from the Spanish hermana meaning "sister."

(2) From the root word yoggua, which means to be condemned.

(4) From the root word ungak, which is "to tilt or lean to one side."  The last name Ungacta also comes from this word.

(6) Deskuida is borrowed from the Spanish. Today, most Chamorros would say deskuido, rather than deskuida.

Posted by paleric at 5:30 AM No comments: 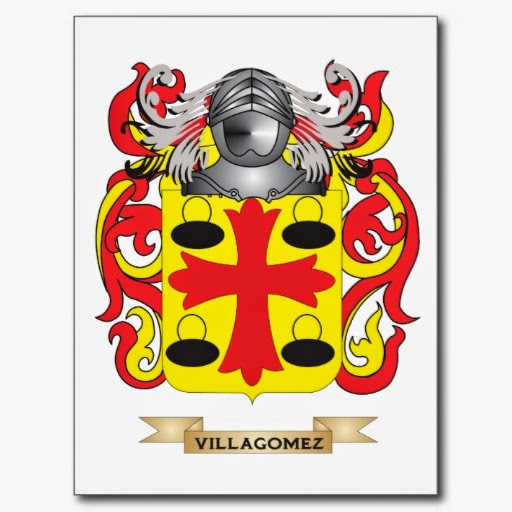 The Villagomez family has been around for a long time now.

At least since 1727, when they appear in the Guam Census.

In that Census, there is but one Villagomez, and his name is Cristóbal (Spanish for "Christopher").

Ana is not a Spanish last name it is a first name). It doesn't sound Filipino, either. One must usually suspect a Chamorro wife, unless a Spanish or Filipino surname suggests otherwise.

There is a Chamorro anña, which means "to attack or injure some physically." The question is if the N in the original manuscript shows the ñ or not. All I've seen so far is a typewritten copy. I'll ask to see a photocopy of the original manuscript. If that has an ñ, then we're in business. If it doesn't, it is still possible that the name Ana is really anña, but the scribe didn't use the ñ for whatever reason.

Our ancestors had names that were often words of actual things, actions or conditions, so anña would be a possible name, like Naputi.

Cristóbal and Francisca had the following children :

Five boys! And there could have been more children after the Census was taken. Two boys had the same name, Manuel.

In the 1758 Census, only the three oldest boys appear. The two Manuels do not.

Juan Jose married Dominga Manfaisen. Manfaisen is a Chamorro name. It is a contraction of "ma fafaisen." Faisen is "to ask."

Jose married Maria Francisca de la Vega. There is only one de la Vega family in the Marianas at this time that appears in records, and that is the family of "Spanish" soldier Manuel de la Vega and his wife Maria Egui. Again, Egui is not Spanish so we can assume she was Chamorro. Although there is no child named Maria Francisca in the 1727 Census, we can speculate she may have been born just after the Census was taken.

If this is accurate, we can see how outside blood was marrying into Chamorro families. The children most certainly grew up speaking Chamorro, as well as perhaps some Spanish in some cases at least.

Lastly, Francisco married Dorotea Ramirez. Dorotea appears in the 1727 Census as a daughter of the "Spanish" soldier Antonio Ramirez and his wife Antonia de la Cruz. We have no idea who Antonia was or her race.

On Guam, the Villagomez name survived mainly because of one Francisco Dueñas Villagomez who, by 1897, had almost a dozen children with his wife Mariana Cruz.

Nearly all the other Villagomezes on Guam in 1897 were women.

Two Villagomez men, born on Guam, moved to Saipan in the late 1800s.

One, Joaquin, married Rita Castro, and became the patriarch for the largest Villagomez branch in Saipan.

The other son, Rafael, married Romana Campos Pangelinan. Chamorros have a hard time pronouncing R, So Rafael was better-known-as Laffet and his descendants became a large clan in Saipan.

Another Villagomez from Guam, Jose, moved to Yap with his wife Maria Mendiola Cruz. The Yap Chamorros later left that island after World War II and returned to the various islands of the Marianas.


WHAT DOES THE NAME MEAN?

There are numerous surnames in Spain that are a combination of the word villa and something else. Villa means "house," as in an estate, larger than just the normal structure called a casa.

Villagomez means "town of Gómez." Gómez is a last name and is found everywhere in Spain and means "son of Gomo." "Gomo" is an old word that could mean "man" or "path." 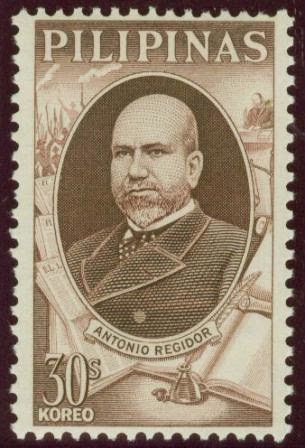 In January of 1872, Filipino soldiers rose up against the Spanish at Fort San Felipe in Cavite. The mutiny was squashed and the Spaniards began their retribution by executing or exiling the rebels, but the Spaniards also targeted many people accused of anti-Spanish ideas or activities, though not directly involved in the revolt.

Many of these arrested for nationalistic aspirations were exiled to Guam, where they were housed with some of the island's elite.

Among the Spaniards of Guam, Vicente Guilló housed the best-known of the Filipino deportados, or deportees - Antonio Maria Regidor y Jurado.

Vicente Calvo y Olivares, a Spanish mestizo with Filipino blood, who was more or less a permanent resident of Guam, housed some rather big names in the Philippines nationalist cause at the time. They were Ramon Maurente y Luciano (allegedly a financier of revolutionary causes), Maximo Paterno y Yanson (father of the more famous Pedro Paterno), Pedro Carrillo y Flores, Jose Mauricio de Leon y Jacoba and the Filipino priests Pedro Dandan y Masancay (he stayed on in Guam for several years, exercising the ministry. He was something of a celebrity in the Philippines upon his return there in 1876 and died mysteriously during the Revolution of 1896.), Agustin Mendoza y Casimiro and Miguel Lasa y Berraches (also stayed on Guam for a while, exercising priestly ministry).

A Filipino, but a permanent resident of Guam and married into a Chamorro family, Tiburcio Arriola, housed two fellow Filipinos, both of them priests found guilty of nationalist sympathies, Feliciano Gomez y de Jesus and Justo Guanson y Vasquez.

These deportados were not simple soldiers, much less common rabble-rousers from the streets. They were men of some education. Some were well-educated (Regidor) and wealthy (Paterno). Many were seminary-educated priests. So political ideas were certainly shared among them and their Guam hosts. One can just imagine Father Palomo discussing politics with them.

Further insight showing us that Guam was not quite the isolated, back-water island it was thought to be.

sa' nina' abak hao,
(because it will make you get lost,)

Cheflåggue = to whistle to someone