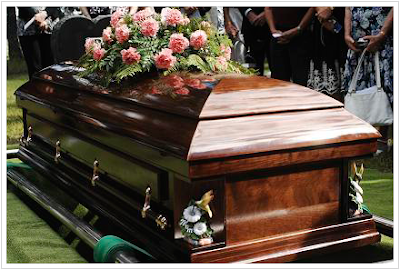 ...finding out who your relatives are.

"Fan minagago hamyo!  På'go gi alas nuebe guaha bela gi gima'yu'us ya debi de en fan man asiste sa' parientes-miyo i matai."
"Put on clothes!  Today at nine o'clock there's a wake at the church and you have to attend because the deceased is your relative."

The child asks, "Lao håfa para in che'gue gi gima'yu'us?"
"But what are we going to do at church?"

"Ai adei nåna," says the child, "håfa na solo an esta måtai na in tingo' na tåtan-måme?"
"Oh my gosh grandma, why is it only when there's a death that we know who our father is?"

As one person said in English, "At a funeral you hear the unheard."

Illegitimate births were considered very shameful in traditional Chamorro culture.  One never ever asked who one's father was.  Asking that could get you a slap or a spanking.

But the moment a father or grandparent died, sometimes the truth would come out and the children were sent to the rosary or funeral.

Sometimes the illegitimate child/children were acknowledged and brought into the circle of mourners.

Other times, the illegitimate child/children were not acknowledged and sat there quietly, while people spoke about their presence under the breath.

It would be considered brazen for the illegitimate child to dress as a mourner without the permission of the legitimate children or widow.
Posted by paleric at 2:47 AM No comments:

I heard recently about an old custom of making åfok, the slaked lime that is added to pugua' (betel nut) and pupulu (pepper leaf), from hima, the giant clam shell.

Like the limestone obtained from coral rock, the hima is baked in a hotno (oven) to a high degree.  When it is fully baked and cools, one just has to touch it and the shell falls apart like powder.

But you still had to sift (ma kula) the powder in a kolladot (wire strainer) to remove dirt, grass and other impurities.  Then you had åfok.  You added water, according to one's taste, to make it a paste if you wanted.  I was told that åfok hima was rather strong.

ÅFOK
(apog or apug in various Philippine languages)
Posted by paleric at 7:04 AM No comments: 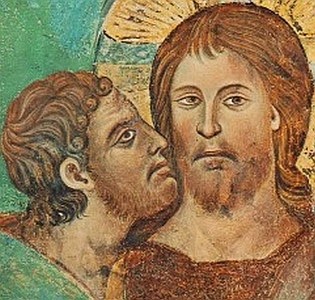 In our culture, be careful what and how you do, say and dress.  Because all is fair game when it comes to getting stuck with a nickname.

Our people were putting on plays a whole lot more back in the days before TV and the internet.  One church decided to put on a play during Lent about the betrayal of Jesus.  A lady tells me the story.

Guaha un taotao ni ma ayek na para guiya si Hudas.
(There was a man chosen for him to be Judas.)

Despues, annai esta monhåyan i play, humåhnanao ha' ma ågang gue' Hudas.
(Later, when the play was over, they kept calling him Judas.)

Åños yan åños despues, gigon ma li'e na mamamaila', ilek-ñiñiha i taotao, "Ei!  Atan sa' estague' si Hudas!"
(Years and years later, as soon as they that he is coming, the people were saying, "Hey!  Look because here is Judas!")

Yan magåhet, ti inestototba i taotao na ma å'ågang gue' Hudas.
(And it's true, that he wasn't disturbed that he was being called Judas.)

This remind me of the time, in my own parish, I had a religious play and chose a teenager to play the part of Jesus as he had nice, long hair already.  For years he was called "Jesus" by his peers.
Posted by paleric at 1:42 AM No comments:

A CHAMORRO IN A HAWAII NURSING HOME 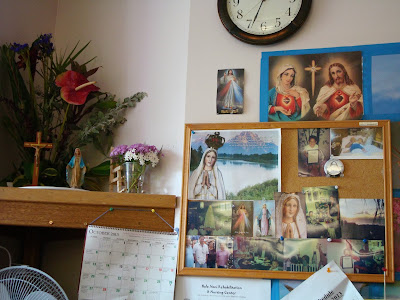 A brief stop in Hawaii gave me the opportunity to visit an elderly Chamorro lady from Saipan who is trying to recover enough strength in her Hawaii nursing home to get back home.

My half-hour visit opened my eyes to see how she and her family are not quite the same as other clients in the nursing home.

The lady is just one of three clients in the room.  In fact, she is the minority.  One out of three.  But she is the dominant flavor of the entire room.  It shows on her part of the wall.  Religious iconography cover every available inch.

But it's also because she has three adult children at her side.  They do not have shifts, since the home does not allow 24 hour visitation.  So, all three of her children are basically there the whole day and into the night, up till visiting hours end.  The other two clients, though residents of Hawaii, do not have any children, much less three, visiting all day.  One, unfortunately, gets no visits.  The other gets a visitor periodically.  Of the three Chamorro children, two live in Saipan and so have made the journey and taken extended leave from work to surround their mother with three children.  Not only does this provide the mother with a larger circle of family, it lightens the load on the children, who have three pairs of shoulders to share the weight.

The four of them pray in Chamorro and sing Chamorro hymns all throughout the day and night.  This does not disturb the other two clients.  In fact, one of them, the one who gets no visits, enjoys them.  Though not Catholic, she is Christian and appreciates the prayers and hymns.  Before I ended my visit, the Chamorro family asked me to bless this neighbor.  She was happy to be blessed.

The lady from Saipan is old enough to have learned Japanese in her youth when Saipan was under the Japanese.  Hawaii has many residents of Japanese ancestry.  The lady from Saipan told me that she would talk more with some of the clients in Japanese, except that many of them are not capable of conversing much.

Lastly, the children of this elderly lady made sure she had Chamorro food to supplement what she was being fed by the home.  I don't know whether they had the blessing of the nursing home or not, but there was saibok lemmai (breadfruit cooked in coconut milk) and I was given a Tupperware bowl of it to take with me, even though I would be boarding a plane in several hours!

The stark differences between this Chamorro lady and her children and the rest of the clients were very noticeable from the start.  Family, constant physical presence, food and the unashamed expression of religious faith were all strongly noted.

A sickly Chamorro woman was being nursed in Hawaii, but to a great extent in a very Chamorro way.
Posted by paleric at 12:58 PM No comments: