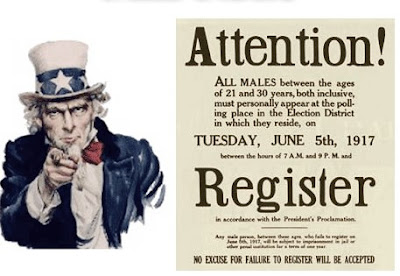 When the United States entered World War I (late) in 1917, males aged 21 to 30 had to register for the draft. This included males who were not U.S. citizens but residing in the U.S., which meant that some Chamorro men living in the U.S. mainland registered for the draft.

These are some of them.

A few Chamorro men served in the U.S. military during World War I but directly from Guam. These are some of those who were already in the U.S. mainland in 1917 and registered. I don't know which of them actually were sent to war. At least one, who was in prison, probably did not go.

It's possible that one of these men was a naturalized U.S. citizen in 1917, but I'd look for documented evidence of that.

John (Juan) Crisostomo, born in 1884. He lived in Marin County in California.

Antonio Dueñas Materne. Born in 1891. Registered in Ohio. He actually rendered his name in the Spanish style; Antonio Materne Dueñas.

GC Felix. Born in 1895. Colorado. This was probably not his original surname (Felix) but many Chamorros did change their names when they moved off-island in those days.

Posted by paleric at 5:54 PM No comments: 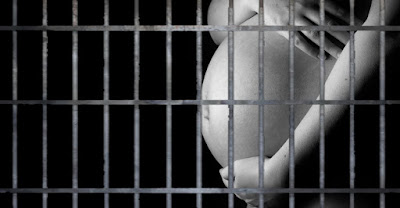 In 1925, a woman named María of Hagåtña was serving time in prison for the crime of adultery.

María was married to one man, but broke her vow of fidelity to him and had relations with another man. Her betrayal was discovered, and she was tried and sent to prison.

The problem was she was pregnant.

When the child was born, a boy named Ramón, he was not given María's husband's last name, but rather María's maiden name. The child was María's, but not her husband's. Ramón's father's name was left blank on his birth certificate. Perhaps the father was the man with whom María had adulterous relations. But it could have been another, for all we know!

In order to give birth safely, the prisoner María was taken to the Naval Hospital. Once the baby was born, what to do with the baby? The baby could not remain under María's care, as she had more time to serve in prison.

Why did the medical officer give the baby to Dolores? What was Dolores doing up in Hagåtña? At the hospital? Questions for which I have no answers.

José and Dolores were not relatives of María. They were not even from the same part of Guam. Perhaps they were childless and looked forward to raising the newborn Ramón as their own. Whatever the case, it was an act of charity for the couple to adopt a baby, the son of a woman in prison.
Posted by paleric at 4:40 PM No comments: 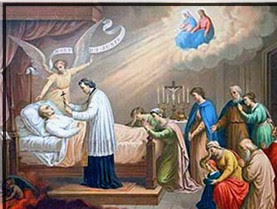 He or she died in the bosom of God.


To place someone on another's lap is to sådde. 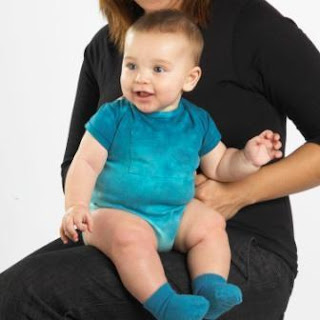 The child is being held on the lap by his mother.

Sitting on someone's lap, especially when a child is sitting on a mother's lap, or the lap of some other caring adult, is a place of safety and security. So older people expanded the meaning of sådde to also mean a place of safety, which can be translated by the English word "bosom."

Originally, "bosom" meant a woman's breast. But over time it also began to mean a place of safety, as in the "bosom of Abraham," or when one's friend is a trusted intimate, he can be called a "bosom friend." A mother carries her child in her bosom.

When a Christian dies a holy death, having made a good confession and receiving the Last Rites, he or she can be said to pass from this life to the safety of God's hands, into His bosom.

Måtai gi sinadden Yu'us. He or she died in the bosom of God. A place of mercy and safety.
Posted by paleric at 4:31 PM No comments: 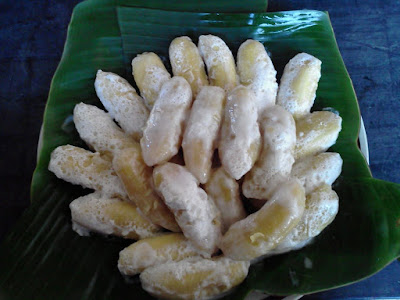 
I enjoy the traditional differences between Guam and Saipan (and Luta and Tinian) in language and customs. I think these differences add color and flavor to our collective Chamorro experience. Just as a family would be less interesting if every child were exactly like the other, our Chamorro family is all the more interesting because of our differences.

These differences are very manageable if we simply adhere to the common-sense rule to "do in Rome as the Romans do." When I am in Saipan, I use the Saipan term. When I am in Guam, I use the Guam term. How difficult is that?

In both Saipan and Guam, we eat the same dish which involves cooking some starch (lemmai, chotda or aga' or suni; breadfruit, banana or taro) in coconut milk until most of the liquid in the milk evaporates and only the oil of the milk remains in white, bubbly patches.

In Saipan and the rest of the CNMI, the dish is called saibok. In Guam, it is called gollai åppan.

Gollai means "vegetable" and åppan means "the water in the dish has evaporated."

THE CHARFAUROS FAMILY OF LIVERPOOL 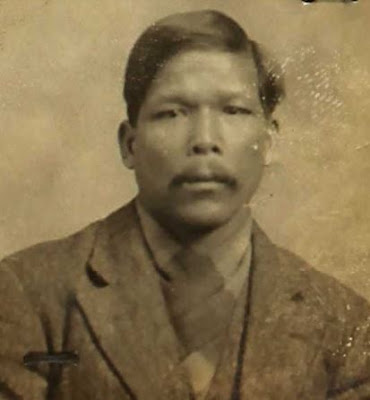 JOHN (IGNACIO) CHARFAROS OF LIVERPOOL
in 1919


I wish I had more firm evidence to say conclusively that John (who was also called Ignacio) Charfaros is Chamorro, but I can't.

But I can say that there is a huge probability that he is Chamorro, and I would bet my last penny that he is.

1. CHARFAROS is not a surname found in the Philippines. From Ilocos Norte to Davao you can scour every inch of the Philippines and not find a Filipino with the last name Charfaros.

2. CHARFAROS is a surname found in Guam, specifically Hågat (and then spread to other villages). In the old days, people spelled Chamorro surnames in a variety of ways. Even brothers sometimes spelled their common surname in two different ways. To this day, we see this historical fact in names such as Megofña/Magofña, Tedpahago/Tedpahogo and Cheguiña/Chiguiña. In the Spanish records, Charfauros was sometimes spelled Charforos, Charfaulos and many other similar ways.

From the Philippines? More likely Guam.
A donkeyman on a ship operated some of the ship's engines.

One thing the records are consistent about is that John was born in 1882. The next thing we know, he is in Liverpool, England in 1912, getting married to a lady from Liverpool with Filipino and possibly Caucasian blood.

John would live the remainder of his life in Liverpool, a seaport city that welcomed many immigrants from all over the world.

His wife, Margaret Madeloso (sometimes spelled Maduloso) was the daughter of a Filipino, Gregorio, and his wife, a woman from Liverpool named Theresa Dair (or Durr). She was born in 1896, and was thus 14 years younger than John and married him at the tender age of 16. There are numerous families in the Philippines with the Madeloso surname, often spelled Madiloso, Madelozo and other ways. John and Margaret were married in the Catholic Church.

John was a seaman, which is probably how he left Guam in the first place. John is identified in half a dozen shipping documents as a crew member of this or that ship, sailing out of Liverpool.

John and Margaret had several children who died in infancy. But one son, Vincent, lived well into adulthood. I do not know if Vincent had his own children, who would have carried on the Charfaros name. It seems that he didn't.

John died on a ship, docked in Glasgow, Scotland in 1947. That makes him 65 years old at the time of death. 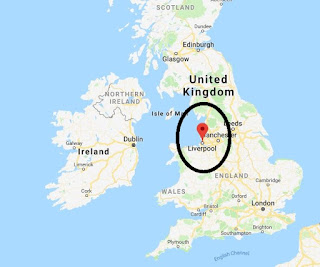 It seems that John's original first name was Ignacio.

In some records, he is called Ignasio, Inacio, Enasio, Enagnasio and even the Chamorro nickname for Ignacio, Inas (spelled Enos in the British documents). When he applied for naturalization as a British citizen in 1936, the announcement in a Liverpool newspaper gave both names; Ignacio and John as an alias.

Perhaps John was just an easier name for British people to say, rather than Ignacio (which they spelled in numerous ways!).

Charfaros was not the only Chamorro who ended up in Liverpool, England.

Sometime in the 1880s, long before Charfaros came, Juan Manibusan from Guam left his ship and settled in Liverpool, also marrying a women he met there. The difference was that Juan, his wife and some of his children moved back to Guam at the end of World War I.

You can google my blog post about them. Search for paleric+"a whaler who came back" or copy and paste this link :

I wonder if anyone in the Charfauros families on Guam have heard about Ignacio (John)?
Posted by paleric at 7:00 AM No comments: 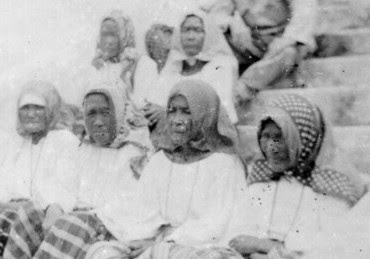 CHAMORRO WOMEN IN 1902.
90 degrees but heads wrapped tightly in case of sereno!


I never feared the cool air. Until I came to Guam. Only then did I discover that the cool air can kill you.

I was only two weeks on Guam, moving here from Arizona, when I came into my landlady's house after mowing the lawn, both on her side of the property and on my side, where I was renting an annex.

She always welcomed me into her kitchen whenever I wanted, and since I was sweating profusely, I wanted a nice cold glass of her famous lemonade.

But instead of a warm welcome when I walked into her kitchen, she looked at me with an expression of horror and told me, "Get out of this kitchen! Can't you feel the air con????"

"No, no, no," she said. "Sus Maria! Do you want to get sick? Go back outside and dry off for awhile. Then you can come inside."

Thus began my island education about the evils of cool air.

Do you have a cold? You probably got wet in the rain and walked into an air conditioned room.

Do you have a fever? Close the windows, turn off the AC, wrap yourself in woolen blankets and sweat it out. You kill a fever with heat. The last thing you want is cool air.

Do you have high blood pressure? High cholesterol? Back pain? A tooth ache? You must have walked into cool air.

Some days later, I had to get up at 4AM so I could pick up a coworker arriving at the airport. I was surprised to see my landlady already up as well.

"Not like that!" she replied. "It's sereno! You're gonna get sick if you don't cover your head." She gave me a hanky and I put it on my head. "At least when you're out of the car, cover your head till the sun comes up. Especially with your hair wet! You must have just showered."

Driving to the airport, I thought how blissfully ignorant we statesiders are about the dangers of the damp morning air. Sereno, as she said. 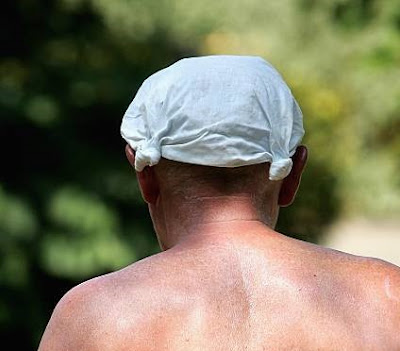 A few months later, I was getting out of my car when the heavens opened up and, out of nowhere, it rained cats and dogs. Unprepared for the unexpected rain, I got completely drenched. My landlady saw this happen, and saw me walk into my air conditioned annex.

The following day, she asked, "You're not sick? I saw you get soaking wet and walk into the air con."

"It must be your white genes," she said.

"I must be a sereno-proof statesider," I said with a bit of sarcasm.

Then last night, she called me on my cell phone.

"You didn't go to work today. Your car was here all day. Are you OK?" she asked.

Right away she said, "And knowing you, it will last exactly 24 hours. You're from the States."

Posted by paleric at 8:24 PM No comments: