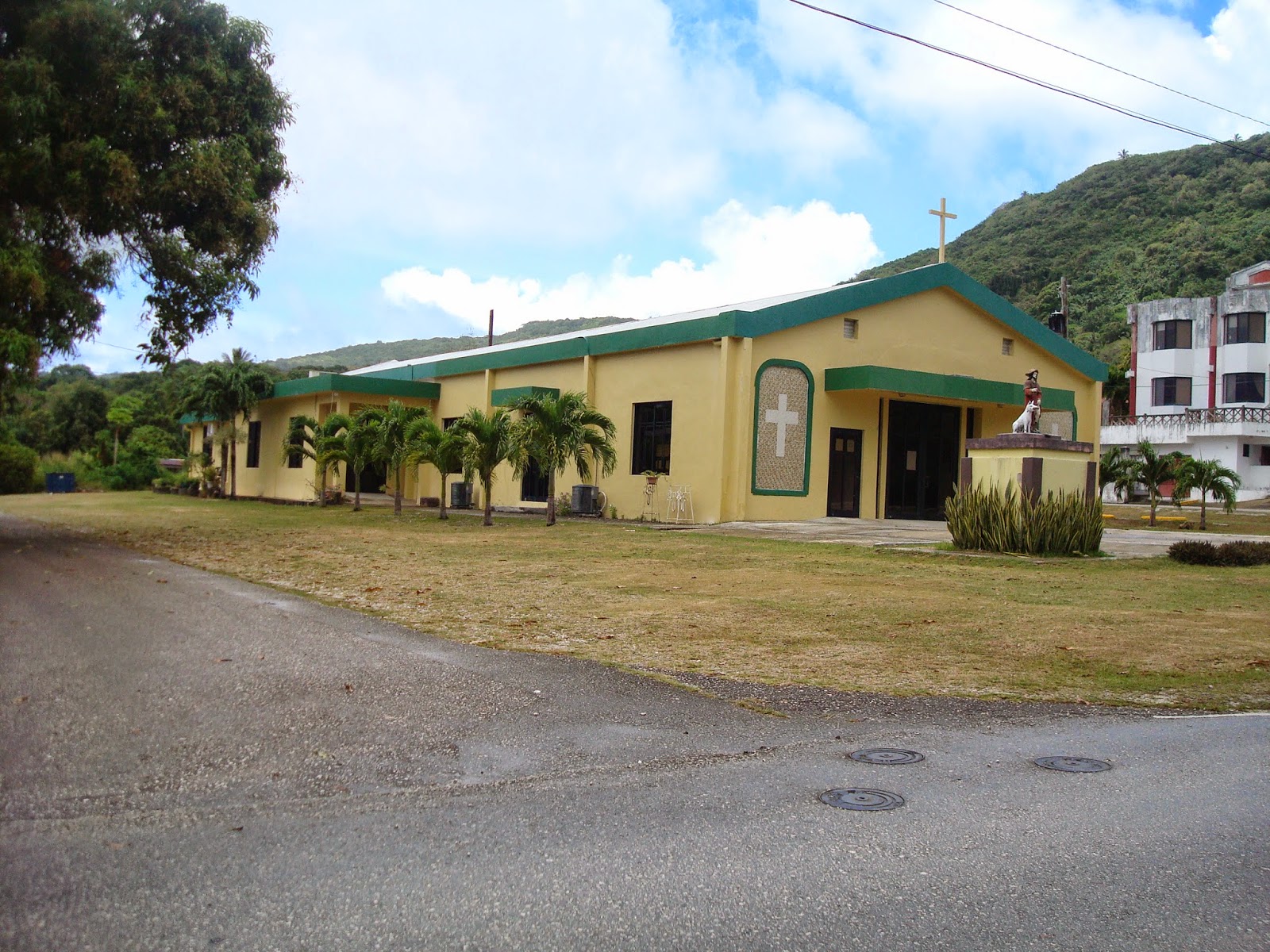 I was pastor of San Roque parish in Saipan for three wonderful years (1991-1994).  The village counted 800 people and it didn't take me long to know all the families.

There were four main clans in the village : Babauta, Camacho, Castro and Santos. Some people even had both names.

It was here that I got a real taste of how Chamorros love to give and use nicknames. Almost everyone was known by something other than their surnames.

Some were known by their spouses.  Some were known by clan nickname, their meanings lost in some cases.  Others were given nicknames based on funny attributes. Sometimes the nickname was not funny at all to the person labeled with it!

Sometimes the nickname applied to the whole family and sometimes just to one individual.  But it was very easy for that individual's children to start being called by that nickname.

Here is a partial list of the family or personal nicknames I found in San Roque.  When possible, I give an explanation.  In no particular order :

Paete' (de la Cruz).  This raises my curiosity, because there is a town in the Philippines called Paete, but this could just be coincidence.  It happens!

Puspus  (Babauta), This was the nickname of a man who, so the story goes, had an accident that affected his walking. He had to exert more effort walking and appeared to be pushing something in front of him.  So some people started to call him "pus pus" as in "push push."  Many Chamorros had a hard time saying the SH sound. Here's an example of Chamorros using an English word for a nickname.

Manggwa' (Santos).  The word is borrowed from the Japanese word manga or comics. Here you see the Chamorros change the pronunciation. This nickname applied to one person, but one person called this man's children "manggwalitos," or "little manggwa'." You see here the ingenuity of the Chamorros in inventing nicknames.

Sando' (Camacho).  This applied to just one Camacho family.  Saipan has many Camachos.

Alabådo (Castro).  Applied to one man named Castro.  The word is Spanish and means "praised" but may come from the opening word in Spanish of the famous prayer "U ma tuna i sen såntos sakramenton i attat" which closes every devotion and prayer in Chamorro.  The original is the Spanish "Alabado sea el santisimo sacramento del altar."  In English, "Praised by the most holy sacrament of the altar."

Tuguini (Mafnas).  Supposedly, the father of this family could not say "taiguine," "this way."  Instead, he would say "tuguini" and thus a new nickname was born.

Sa'i (Babauta).  A very large clan.  The family story is that six fingers and toes (sais, shortened to sa'i) runs in this family.

Måtseliåno (Castro).  The ancestor of this clan of Castros was named Marceliano, pronounced Måtseliåno by Chamorros.

Marubong (Castro).  A branch of the Måtseliåno clan.  The word supposedly comes from a Japanese word for liquor.

Pandan (Santos).  Given to just one woman, but her children were often called by the same name.

Elis (Camacho).  Applied to just one man, whose wife was Elisabeth, shortened to Elis.

Pilot (Tudela).  Just one man was called this, but everyone referred to him and his family by this name.

Half-Inch (Santos).  Only one man had this nickname, but he had the same first and last names as another man in the village.  So people gave him the nickname "Half-inch" because he took very short steps when he walked.

As pastor, I frequently heard these nicknames.  Many times, I was not told to go see Santos or San Nicolas but rather to go see Pandan or Dågo.

Even I was given a nickname, which thankfully did not last.  For a while I was "Påle' Rambo."  But that's another story.
Posted by paleric at 7:20 PM 1 comment: 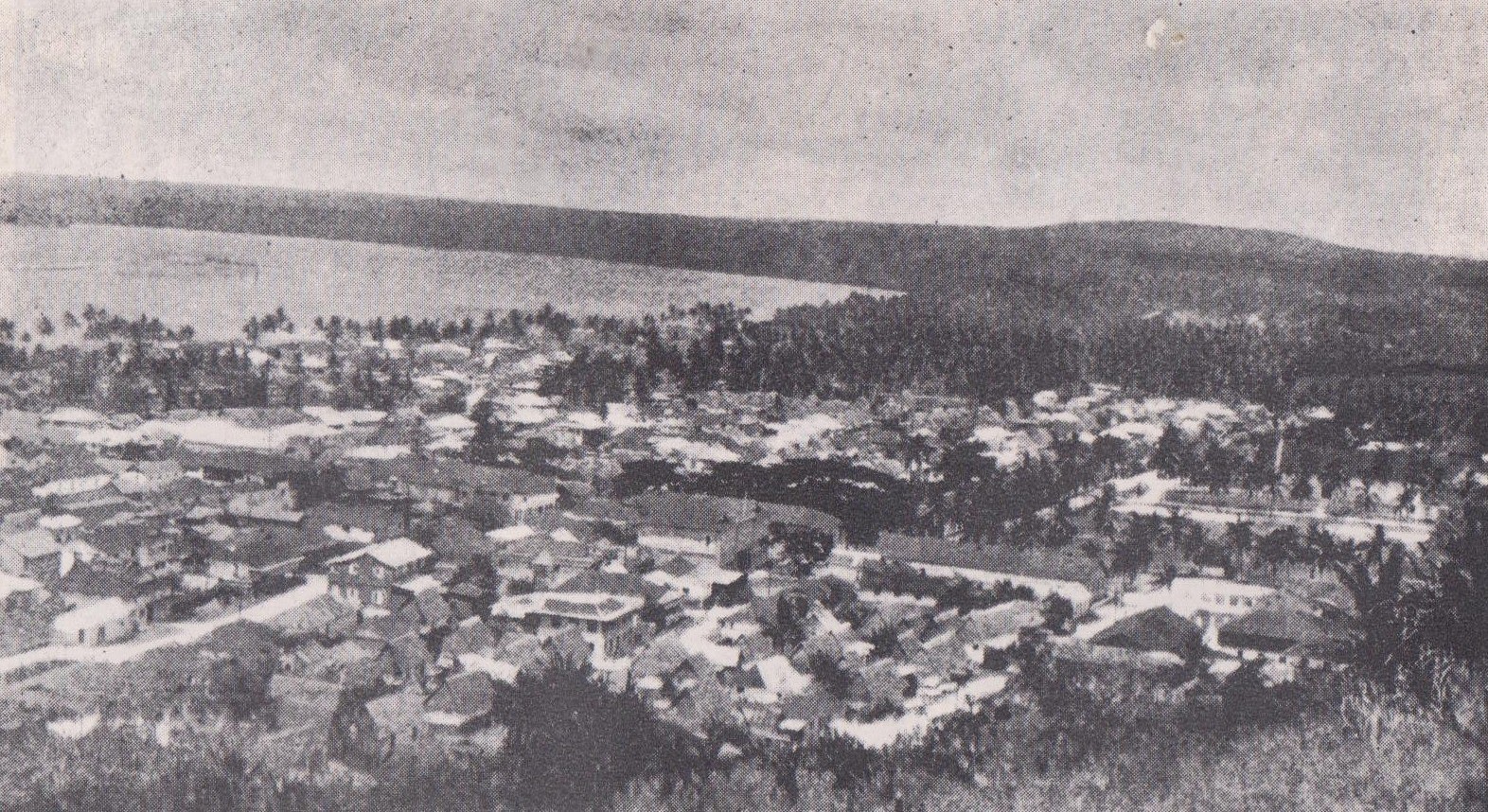 The Hagåtña church, plaza and Governor's Palace (palåsyo) were actually situated at the extreme north end of the city.  Beyond the church, in the direction of Minondo and Mongmong, there were hardly any houses.

The rural plains of Tiyan, Barrigada, Ungåguan and other districts are visible; rich farming lands inhabited by 800+ people.  Mount Tuyan, now known as Barrigada Heights, is noticeable for its lack of housing, so different from today. 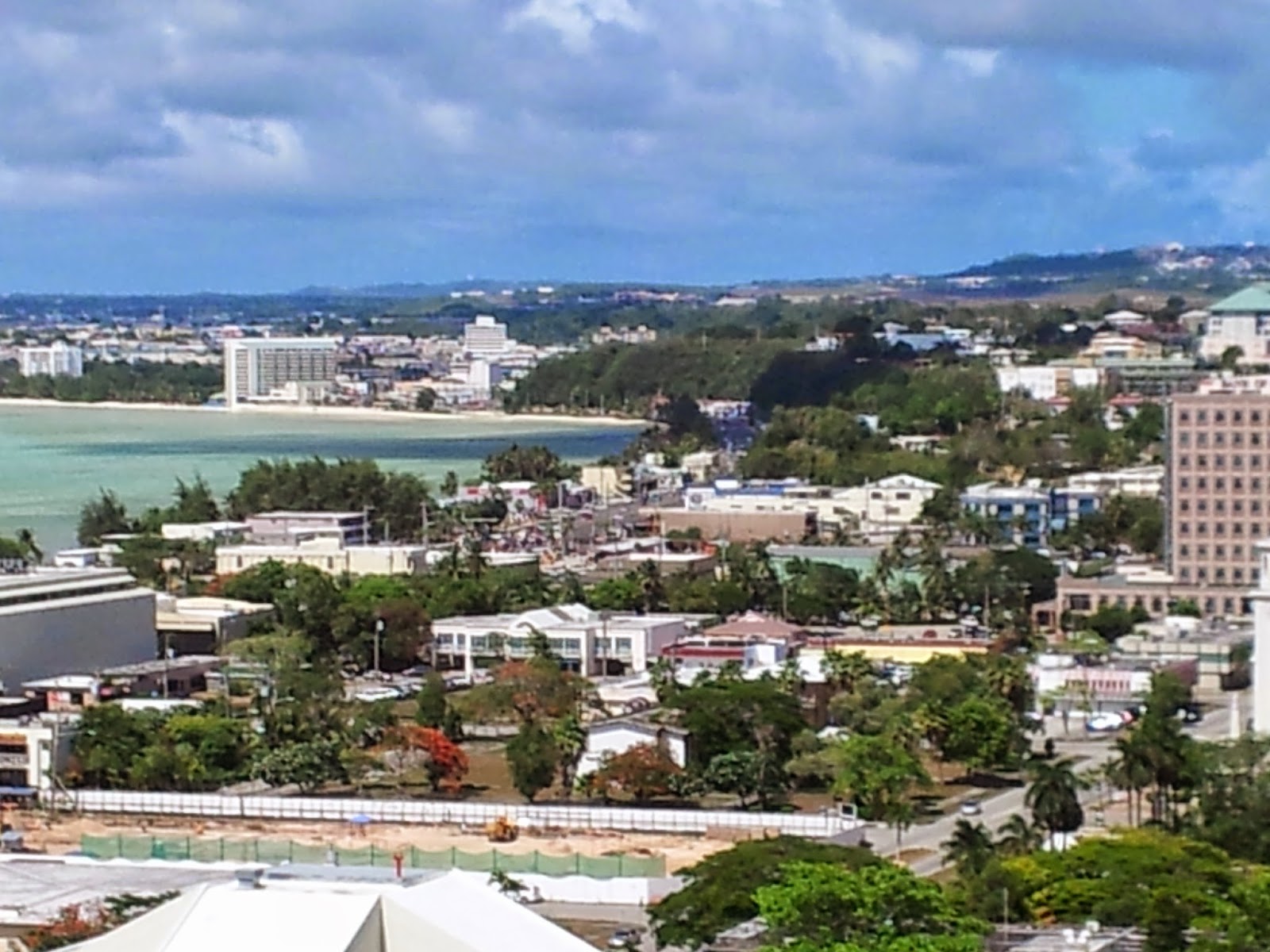 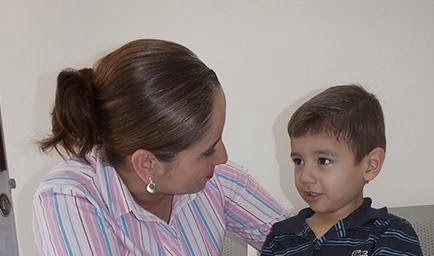 I derecho yan obligasion para u fan ma eduka i famagu'on, iyon-miyo i mañaina.
(The right and obligation to educate the children is yours, the parents.)

lao åhe' ti pot para u ma chule' i tarean i saina.
(but not to take away the work of the parent.)

Lao guennao ta'lo, i Pale' ti para u chule' i tarean i saina pot kosas relihion,
(But there as well, the priest is not to take over the work of the parent in religious matters,)

i gima' finene'na nai ma fa'någue i patgon.
(the home is where the child is taught first.)

i doktrina siempre ti u meggai na probecho para guiya.
(there won't be much benefit for him from catechism class.)

Posted by paleric at 8:31 AM No comments: