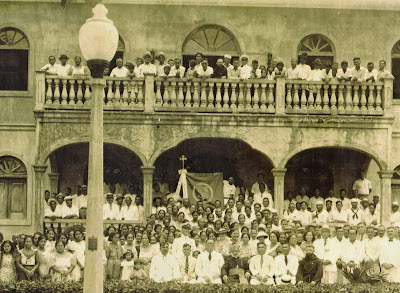 It was headed by such prominent Guam business and civic leaders as Antonio Suarez, Vicente Calvo, Judge Manibusan, Jose M. Torres, Pedro Martinez and James Underwood, all seen in the photo above with Bishop Olaiz in the center and Påle' Blas on the right.

The group photo of the Society was taken in front of their own hall, built adjacent to the Agaña Cathedral around 1930.

The Society chipped in money and collected donations from the general public and gave these funds to the most needy families.
Posted by paleric at 8:50 AM No comments: 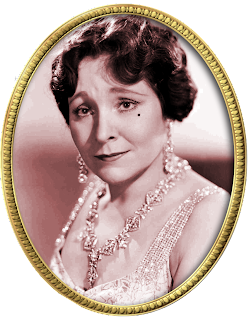 Who can forget Margaret Dumont, the actress, always bedecked with the most elegant jewelry.

In Chamorro, we call that kåtsa.

It means to dress elegantly, with fine jewelry, or the smartest fashion for the men.

In the old days, "dressing up" made one stand out, and standing out in a Chamorro context always invites teasing.

A guy dressed to the nines walks into a store.

"So?  Where are you coming from?  Because the rascal is all dressed up!"

Again, this word is borrowed from the Spanish calza, a fashion term but it doesn't mean to be "dressed up."  We borrowed it, but gave it our own meaning. 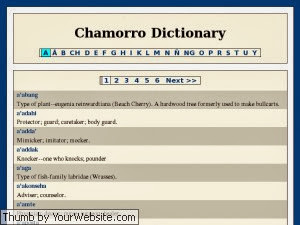 In Chamorro, when something is easy to do, we say it is libiåno.

Although the word is Spanish in origin, we have given it a meaning that has strayed a bit from the original Spanish meaning.

In Spanish, liviano means "light" in weight.  They got it from the same Latin root that gives us the English word levity, or lightness (in weight or spirits).

But even in Spanish, different locales have given it secondary meanings, like "frivolous," "fickle" and even "lewd."

So our Chamorro ancestors also gave the word a new shade of meaning.

Something light in weight is easy to handle.  So libiåno came to mean "easy" in every way.

But it's a false friend in Spanish because you can't go to Spain or Mexico and ask that something be done the libiåno way.  They'll think you mean light in weight, not easy to do,
Posted by paleric at 11:07 AM No comments:

20 SIGNS YOU'RE NOW A "LOCAL STATESIDER" 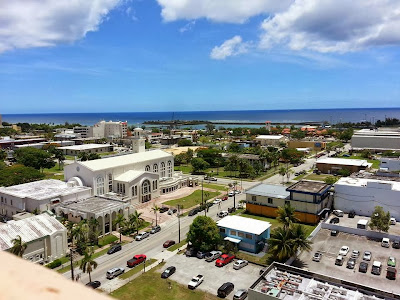 My stateside dad has been living on Guam continuously since 1959 and is definitely "local statesider."  It got me wondering what are the tell-tale signs that a statesider has become local.

1. Understands that the 35mph signs are just reminders how we used to drive in 1974.

2. Goes to the Talofofo fiesta, even though he or she's not Catholic.

3. Figures out immediately how two people are related.

4. Skips straight to the Assistant Manager, whom s/he knows, rather than speak to the Customer Service Representative.

5. Isn't bothered by geckos anymore; believes they're good because "they eat the bad bugs."

6. Prepares all morning to spend the day at the beach, and once there looks for the most shade.

7. Goes to Kentucky Fried Chicken for the kelaguen.

9. Still doesn't speak Chamorro, but adds "nai" at the end of English sentences.

10. When waiting at a red light, doesn't dare look over to the next driver.

12. Can never go to any store without saying "hi" to at least one person.

13. Knows that "Abe Maria Purisima" is the end of any rosary.

14. Drives down south, passes a carabao without even looking at it.

15. Is single with no family, but still has to visit someone at GMH.

16. Actually has reasons NOT to vote for some senatorial candidates.

18. Looks for the soy sauce, tabasco or tooth pick in any restaurant of any cuisine.

19. Walks through Micronesia Mall and says to self, "So many statesiders now on Guam!"

Email ThisBlogThis!Share to TwitterShare to FacebookShare to Pinterest
Labels: E'sitan/Humor 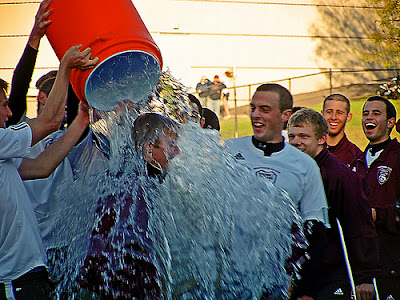 More people are familiar with the word fotgon.  But fotgon means wet; måsmai goes further.  It means someone or something is totally soaked.

Måsmai yo' gi ichan.  I was soaked in the rain.


The word måsmai is a contraction of ma sumai.  Sumai means to submerge in water or liquid.
Posted by paleric at 12:05 PM No comments:

September 24 is the feast of Our Lady of Mercy.  Up in Saipan, since 1928, the Mercedarian Missionaries of Berriz (Spain) have been ministering and brought this hymn to that island.

It is not sung anymore by the people, but we still have the music and lyrics.

The lyrics can be found here : 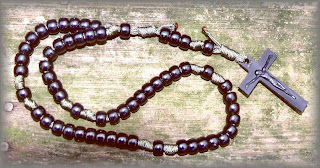 Nowadays there is a bit of an attempt to keep praying in Chamorro alive, but, as younger Chamorros who are less proficient in the language take leadership in this, they may not be aware of some of the more common mistakes being made when praying in Chamorro.

Here is, I hope, a simple guide to help us watch out for these.

Explanation : The English is, "On earth, as it is in heaven."  When the missionaries translated this into Chamorro, their rendering was "as it is on earth, as in heaven."  They used the Spanish word así, which means "like this" or "like that."  The stress is on the second syllable; aSI.

So, once again, the English is, "Thy will be done, on earth, as it is in heaven."  We're talking about God's will being done on earth as God's will is done in heaven.  No talk about forgiveness here.

"May your will be done, like on earth, as in heaven," would be a more literal translation of the Chamorro.

Older Chamorros, more accustomed to Spanish, would have understood the word así.  But modern Chamorros, cut off as it were from their Spanish influences, don't recognize the word así and confuse it with asi'e.

Explanation : In the Hail Mary, in English, we say, "The Lord is with you."  It's a declarative statement.  It declares something existing.  The Lord IS with Mary.  Not will be; not we hope will be; but rather IS.

The Chamorro word u is a future marker.  It means "will be" or "hopefully will be."

Siempre u ma cho'gue agupa'.  It will surely be done tomorrow.

Puede u ma cho'gue agupa'.  Hopefully it will be done tomorrow.

This is not only linguistically inaccurate, it is also theologically off.  The whole point Gabriel was making was that Mary was "full of grace,"  connected with God in a way radically different from the rest of Adam's race, who were cut off from God by Adam's sin.

Mistake : Ya u ma tuna i finañagu-mo as Jesus.

Correct : Ya ma tuna i finañagu-mo as Jesus.


Possible Source of the Confusion

In the Glory Be, we say "U ma tuna i Tata, yan i Lahi-ña, yan i Espiritu Santo."

There we do use the u, because in this particular prayer we are wishing glory to God.  Of course God is already glorified, whether we glorify Him or not.  God doesn't need anyone to glorify Him; He is glorious in Himself whether anybody knows it or not.

In this short prayer (ejaculation) which is unique among Spanish-speaking and Spanish-influenced places, we say :

Explanation : This prayer is actually in Spanish, pronounced the Chamorro way.  The original Spanish is "sin pecado concebida."  "Conceived without sin."

Sin is Spanish and Chamorro for "without."

Sen is Chamorro for "very much."

If we say, "Sen pekådo," we are saying, "Very much sin."  Not something we want to say about the Mother of God.
Posted by paleric at 10:54 AM No comments: 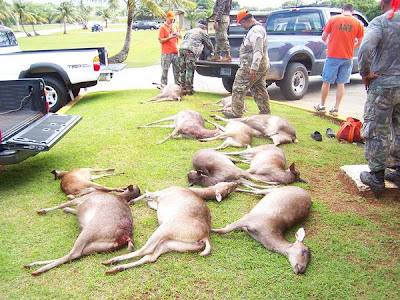 Guam's deer, or benådo, were brought to the island by Governor Mariano Tobias in the early 1770s.

They became so rampant that they damaged crops, including the governor's own garden behind his Palacio.

Maisa : alone, by itself

Iho : Spanish, but used by older Chamorros along with låhe for "son" 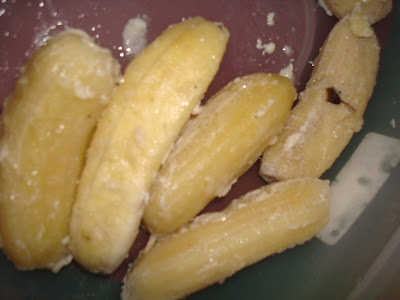 In Saipan and Guam, we basically eat the same food and call them the same names, but sometimes the names are totally different.  If you ask for that food in Saipan using the Guam name, they may not know what you are talking about, and the same holds true for Guam if you use the Saipan name.

In both islands, we all eat bananas, breadfruit, taro and other starches cooked in coconut milk.  But on Guam we call it gollai åppan.  In Saipan, it is called saibok.

It's interesting that almost all the Chamorro families in Saipan come from Guam families that moved up there between 100 and 150 years ago.  That's not a long time span, and there's only 120 miles that separate us, but little differences in language have evolved nonetheless.

Posted by paleric at 5:11 AM No comments: 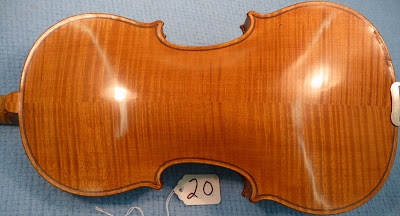 A huge branch of the Pangelinan family is better-known-as the Kotla family.

Where Chamorro families got their nicknames is often a mystery.  Sometimes the origin is easy to figure out, especially when the nickname comes from the name of an ancestor such as the Siket (Castro) family, named for their ancestor Ezequiel (Siket) or the Nåndo family (Peredo), whose ancestor was Fernando.

Other times, the family has preserved a family story, such as the Charot (Taitano) clan which has the lore that their ancestor was given a pair of shoes known as charol in Spanish.

As for Kotla, if we looked for a Spanish origin, it is possibly derived from an old Spanish term corlar, which means to apply a gold varnish on something, like the beautiful violin in the picture above.

I wouldn't be surprised if the ancestor (Juan Flores Pangelinan) worked with varnishing and was said to have been good at kotla, the Chamorro pronunciation of corla, which means "he applies gold varnish." 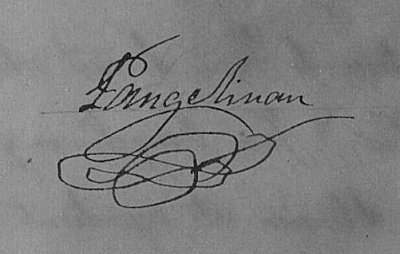 SIGNATURE OF JUAN KOTLA IN 1898
He didn't need to add his first name Juan. His flourish at the end of his surname was enough identification.


Family traditions were rarely documented, so unfortunately these things get lost with the passage of time, unless the family preserves a credible story.  If someone in the Kotla family knows such a family tradition, please chime in.

What you throw in front of you, you will surely find.


Christ put it this way, "You reap what you sow."

Therefore, don't cry over what you yourself have arranged for yourself.

In college I remember a classmate using this imagery.  Some people go about life throwing thumb tacks in front of them as they walk.  Then they go "Ouch, ouch, ouch!"

We humans have a knack for self-destruction.  One of the consequences of Original Sin.  But repentance is always an option.

Stop throwing tacks ahead of your steps.

Posted by paleric at 4:09 AM No comments: