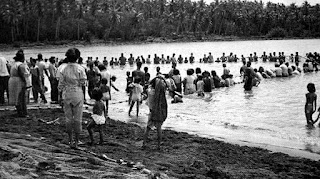 
Most of us are familiar with the small fishing net called talåya; small enough to be thrown by one man.  But, to catch more fish, a bigger net, called the chenchulo, needs to be handled by a large group of people, usually men.  The outer ring of the net would be lifted, trapping the fish that had collected towards the center of the net.  The fish would then be distributed (fåkkai); a third to the net owner, a third to the people who helped and a third to the community (the sick, the elderly, the poor).

Although this technique is ancient, the word chenchulo is suspiciously close to the Spanish word chinchorro which means, surprise, surprise, "dragnet."  Remember that we usually change the R to an L.

More than fishing techniques and instruments, one feels when looking at this old photo the tight sense of community in the outlying villages of Guam at the time.  One can feel a bit of it even now in the southern villages.  Everyone knows everyone's family.  They interact with each other and have stories about each other.