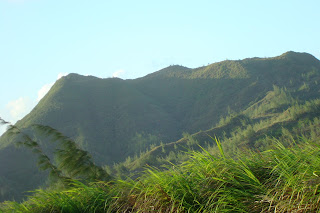 Yes, this is Angry Mountain, and it's right here on Guam.  When you drive down to Naval Station, Agat or Santa Rita, you're bound to see it.  It's the high peak to the north of Apra Heights.

On your maps, however, it will appear as Mount Tenjo.  And since many of you read Chamorro with American eyes, you'll say Mount TEN - JOE.

The Chamorro word is actually TENHOS.  And it means "angry, irritated, impatient" and nice things like that.  Nobody uses that word anymore; it is obsolete.

Tenhos was also the name of one of the months of the ancient Chamorro lunar calendar; more or less August.

The reason why it is spelled Tenjo is because the Americans, when they first got here, looked at Spanish maps of Guam, and, for the Spaniards, J sounds like an H.  You know - Jose and Juan? 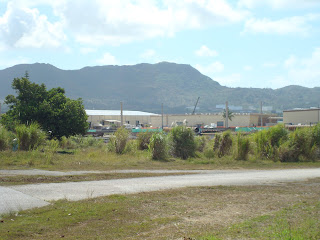 Around World War I, the Americans established a military installation there - Camp Barnett.  The German officers of the HMS Cormoran which was scuttled in 1917 were detained there.  The German sailors were sent to Asan Point instead.  The camp was later abandoned but there are still some physical remnants there of the camp.

We really ought to go back to spelling it Tenhos.  Why?  First of all, to get people to stop calling it Mount Ten Joe.

Secondly, there is another Mount Tenjo, in Japan, where it should be pronounced Mount Ten Joe.

Many people climb up Mount Tenjo in Japan to get a good look at the bigger Mount Fuji in the background here.
Posted by paleric at 12:05 AM