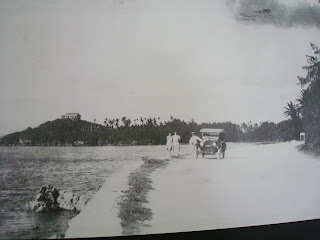 That's the Atkins Kroll building at the crest of the hill.  Prior to that, Adiluk was used by the Spanish as a site for a leprosarium and by American Protestant missionaries.  It has been called Devil's Point (Punta del Diablo) and Missionaries Point, among other names, over the years.

Notice how the the road from Piti to Hagåtña goes right along the shore.  It isn't paved either, but it is surfaced with kaskåho. 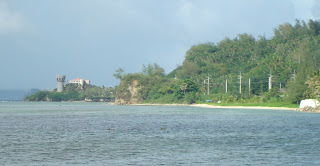 Not the same angle, but one can see the big latte stone now and the new building that was once the Guam Museum.
Posted by paleric at 8:29 AM