It was only the second mass trial of black military servicemen in the U.S. during World War 2.

Some forty-five black service men were convicted and given different sentences for a "riot" on Guam involving white Marines. The troubles included some deaths, and also, according to many reports, Chamorro women who were pursued by both white and black military men.

Reflecting the general tenor of the country at the time, the U.S. military was a segregated one in World War 2. Black servicemen were grouped together in their own companies and quarters, separate from the whites, and even had their own line for meals in the canteen. Black nurses treated black patients in military hospitals.

INCREASING RACIAL TENSION IN THE MILITARY ON GUAM 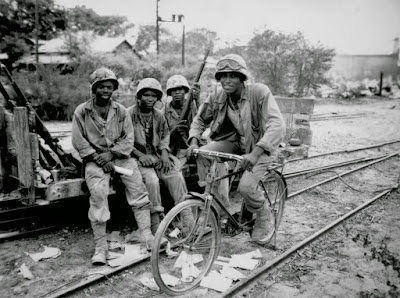 On Guam in 1944, four companies working in the Marine supply depot were comprised entirely of blacks.

For some time, white Marines targeted these black Marines, yelling racial slurs, throwing at them empty bottles, rocks and even hand grenades and smoke bombs on a few occasions. One of these smoke bombs thrown by a white Marine landed in the fuel dump, where black Marines were working with dangerous amounts of octane gas. An explosion, putting the black men at the risk of their lives, was gratefully avoided.

Complaints by the black Marines fell on deaf ears with the higher command. This only increased the sense of frustration and helplessness among the black men, convincing them that they had to take matters into their own hands. As one black Marine said about doing military service on Guam, he might as well be in a "town in the deep South," since he found the same racial discrimination in both circumstances.

Part of the tension involved competition over the Chamorro women these military men met. Besides a general kind of competition for these women's attention, there seems to have been a few cases of specific rivalry between a black and a white service man over a specific Chamorro lady.

The military commander (and civil governor) of Guam, Major General Henry Larsen, was warned that trouble was brewing among his own service men. Larsen preached reconciliation and unity, but his words came too late. In December of 1944, verbal assaults and bottle throwing turned more violent. Shots were fired and men, both black and white, were killed.

More than once, black Marines left their camps in the Hågat-Sumay area and went up to Hagåtña, only to engage in fights with white Marines. White Marines in jeeps drove by the black camps, firing shots. The last time, early in the pre-dawn hours on December 26, a caravan of black Marines, armed with weapons taken without permission, heading towards Hagåtña hoping to get back at the white Marines, was stopped on the road by a military barricade. The black men were arrested.

THE STORY WAS BLOCKED BY THE NAVY

During World War 2, news reports were heavily censored by the government in the interest of national defense. After all, you don't want the enemy to get tipped off about America's military situation by reading the morning newspaper. The Navy therefore blocked the release of news reports about the racial riots among the military on Guam. It would be bad for military morale and bad for the image of the U.S. in the world.

Except that.....Walter White was in the picture. 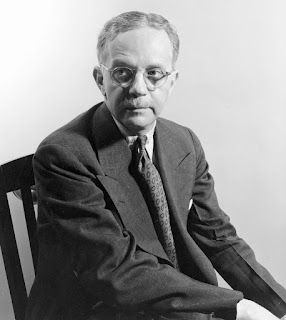 Walter White was the Executive Secretary, at the time, of the National Association for the Advancement of Colored People, the NAACP, the nation's influential advocacy group for black Americans. White happened to be on Guam in December of 1944 right when the racial troubles blew up.

He served as counsel to the black Marines arrested on Guam. He would make sure that their case would receive the attention and fairness that he believed they had a right to.

The forty-some black Marines tried and convicted for things such as rioting and the abuse of military property (like the guns they took) got dishonorable discharge and prison terms as high as four years down to four months. The fewer white men facing charges got considerably lighter sentences, as low as 20 days' confinement which was then written off.

As soon as the news blackout was lifted in July of 1945, White made sure that the story of the convicted black Marines made national news. He also put pressure on the Navy to reopen the case and look at significant factors that were not considered at the trial, such as the intimidation given the black Marines by the white ones, and the non-action of the military commanders to diffuse racial tensions by taking seriously the complaints of the black Marines.

In 1946, the Navy released from prison those black Marines still serving time for the Guam "riots."