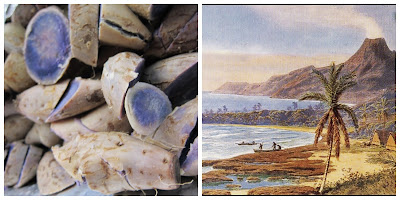 An American whaling captain once visited Pagan and took some kamute (sweet potato) growing there on board. Seven months later, still on the high seas, the Pagan kamute was still in fresh condition, which amazed the captain so much that he took the kamute to a scientist at UC Berkeley to be studied and hopefully be planted in the US.
James Alden Macomber was a veteran whaling captain, so well-known a whaler that he was called "Sperm Whale Jimmy."
In April of 1905, while whaling in the North Pacific, Macomber, commanding the Gotama schooner out of San Francisco, made a stop at Pagan. The Germans were in charge of the Northern Marianas at the time and there were people living on Pagan, especially engaged in copra production. One of the local products he tried there was the kamute. Liking the root, he took a good quantity with him as he sailed away.
He expected it to go bad after several weeks, like other root plants. But, to his amazement and pleasure, the kamute stayed fresh right up to his return to San Francisco in November. He decided to take a sample to Professor EJ Wickson at the University of California Berkeley, just across the bay from San Francisco.
Wickson succeeded in propagating seed from the Pagan kamute and made it available to growers. Sweet potato farming was big in Merced County, not far from San Francisco. Wickson called the Pagan kamute "Macomber's Sweet Potato." But, a quick search for "Macomber's Sweet Potato" turns up nothing. The kamute was white-fleshed, and the white sweet potatoes grown in California today go by other names, so who knows what became of the Pagan kamute that ended up at UC Berkeley!

The kamute, by the way, came to the Marianas by way of Mexico, where it is widely grown and eaten. From Mexico it also went to the Philippines. Our word kamute and the Spanish word camote are taken from the Nahuatl word camotli. Nahuatl is a native language of Mexico spoken by the Aztecs.
Posted by paleric at 1:32 AM