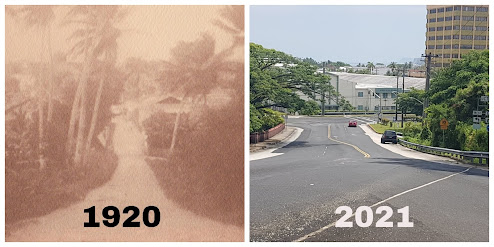 One hundred years ago, this is what the road going down San Ramón Hill into Hagåtña looked like, in the photo to the left. Just kaskåho (gravel), no dividing line and no posted speed limit, neither for automobile nor karetan guaka (cattle-driven carriage).
Gravel roads are not as common today as in the past, and one of the problems with gravel roads is you basically deal with only two conditions. DUST when it's dry season, and MUD when it's rainy season.
The rain also often washes away part of the road, sometimes leaving deep barångka (potholes) that can send your car to ICU.
But the paved road after the war didn't guarantee total safety. Just in the ten years of the 1950s, there were a dozen or more news reports about cars losing their brakes and rushing down the hill; cars stalling on their way up the hill and falling back down the hill in reverse; the gas pedal getting stuck to the floor, sending the car into race mode! 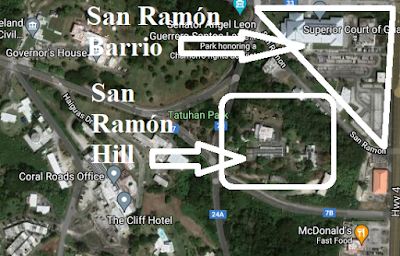 Some people mistakenly say that Government House is on San Ramón Hill. But what is commonly understood as San Ramón Hill is the hill right above what used to be the barrio (district) of San Ramón, which is where today's court buildings are, as well as the Guam Law Library, some offices and private residences.
1900 MURDER
The bottom of San Ramón Hill was the scene of a murder in old Guam, something that was rare back then. In 1900, a man was shot in the back three times by someone known to him. The story can be read at :
https://paleric.blogspot.com/2017/09/murder-in-san-ramon.html
Posted by paleric at 10:04 AM