GERMAN SHIP BLOWS UP IN APRA HARBOR
April 7, 1917
SMS CORMORAN
Originally a Russian ship, the Germans captured it in 1914 and re-fitted it at their colony in Tsingtao, China, naming it after a prior ship of the same name.  There is a historical first associated with the Cormoran from the outset; it was the first naval prize won by Germany from the Russians in the First World War.

While sailing in the north Pacific, the Cormoran was pursued by Japanese warships.  Japan, at the time, was at war with Germany in the First World War.  Since the U.S. was, at the time, neutral and not at war, the Cormoran pulled into Apra Harbor to escape the Japanese, as the ship was running out of coal.

Governor Maxwell supplied the ship a small amount of coal and ordered the Cormoran to leave, but the Germans refused.  So the Cormoran was detained, and for two years, the German sailors lived on Guam, often very happily!  The Catholics on board even formed a choir to sing at the Hagåtña Cathedral for Christmas. 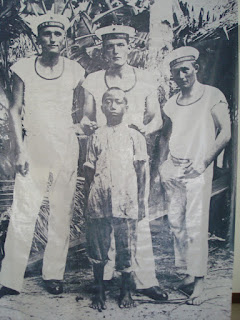 German sailors of the Cormoran with a Chamorro boy
On April 7, 1917, however, everything changed.  The United States finally decided to enter the fight and declared war on Germany on April 6 (April 7 for Guam).  The Cormoran was now considered an enemy ship, subject to seizure by the U.S.  Rather than let his ship fall into American hands, the Captain of the Cormoran blew it up himself.  Before this happened, however, the Americans fired a shot over the ship - another first!  The first shot between Americans and Germans in the First World War.

Nine German sailors died as a result of their own scuttling, and are buried at the Naval Cemetery in Hagåtña.

The Cormoran lies under water in Apra Harbor to this day, with a Second World War Japanese casualty, the Tokai Maru, resting on top of it - another rarity!  Two enemy ships, sunk in two separate World Wars, lying in the same watery grave. 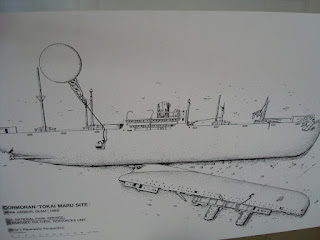 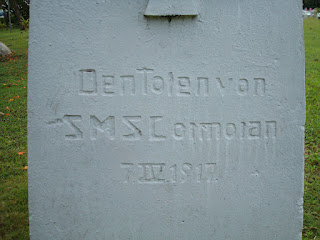 Memorial to the fallen German sailors of the Cormoran
at the U.S. Naval Cemetery, Hagåtña

The memorial is written in German and says