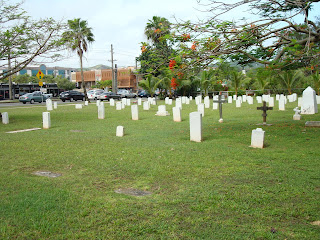 I noticed they took down the fence at the Naval Cemetery in Hagåtña.  The cemetery was opened by the newly-arrived American Naval Government quite early, as the oldest grave is dated 1902.

One of the most historical features of this cemetery are the graves of several German sailors who lost their lives in the scuttling of German ship the SMS Cormoran in 1917.  To read up on the story, go to http://en.wikipedia.org/wiki/Scuttling_of_SMS_Cormoran. 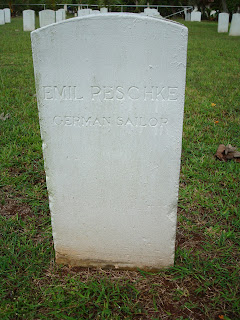 Emil Reschke was one such unfortunate German seaman. 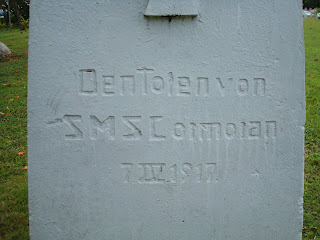 Several more individual graves exist, but a monument to all the Cormoran dead is also on site at the cemetery.   The marker reads, "Den Toten von SMS Cormoran.  7 IV 1917"
"The dead of the SMS Cormoran.  April 7, 1917." 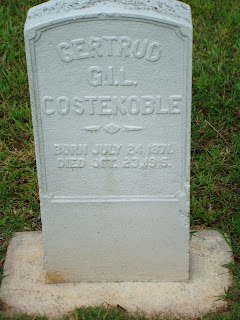 Besides the German sailors, there is the grave of a civilian German, Gertrud Blum Costenoble, the wife of Hermann Costenoble.  She and her husband moved to Saipan in 1902 when it was a German colony, but then moved to American Guam in 1904 where they engaged in business.  Of her 9 children, one was born on Saipan and the youngest was born on Guam.  Gertrude died on Guam in 1915.﻿  The Costenobles moved back and forth between Guam and Manila, and most eventually settled in the U.S.  But while on Guam, besides running businesses, they were a prominent part of the social scene.
Finally, there are many graves of both American and Chamorro service men in this cemetery.
Posted by paleric at 11:37 AM

Email ThisBlogThis!Share to TwitterShare to FacebookShare to Pinterest
Labels: Sementeyo/Cemeteries