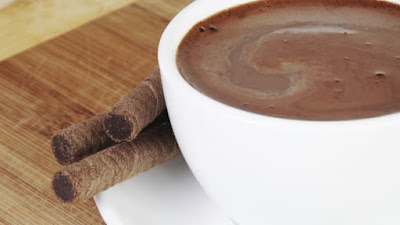 
Long before we were sipping our coffee mocha at our favorite island coffee shop, our great grandparents were drinking chocolate almost every day.

Chocolate comes from the cacao seed and, thanks to our tropical climate, the cacao tree can grow very successfully here. Thanks also to our historical connection with Mexico, the cacao tree was brought to the Marianas. Spain ruled the Marianas out of Mexico. The yearly galleons sailed from Acapulco, Mexico to Manila, often stopping by the Marianas. Many of the so-called "Spanish" soldiers stationed on Guam were actually Mexican.

So, growing cacao and using the beans to make chocolate became a very Chamorro thing to do.

Just listen to a man's testimony in a 1910 Court case.

A man living in Hagåtña was called by his nephew Mariano in Hågat to come down back to the south, as the man's mother was seriously ill in Humåtak. The man describes passing the night in his nephew's house in Hågat  and what happened when they woke up.

"We passed the night on that day in his house. On the next morning, when we woke up, I opened all the windows of the house. Afterwards I charged Mariano to cook chocolate, and I went to the Japanese store to buy biscuits for our breakfast."

A few notes about this short paragraph.

2. Cook chocolate. Chocolate was a common breakfast beverage. Not a candy but a beverage. And it had to be cooked. I'll describe that further down in this post.

3. Japanese store in Hågat. In the court testimony, the store is identified as being owned by Kosaku Okiyama, later known as Francisco as he was baptized Catholic in order to marry Ana Charfauros Carbullido.

HOW OUR PEOPLE MADE CHOCOLATE

1. Dry the cacao seeds after harvesting and extracting the seed from the shell. According to Safford, one could also ferment the seeds first, which improved the flavor of the cacao. 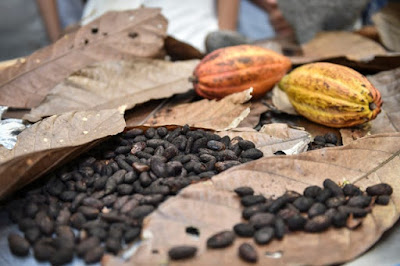 2. Roast the seeds, or toast them in a pan over fire. This step is only done when one is ready to drink chocolate that day. Otherwise, the dried seeds are stored for later roasting.

3. Grind the toasted seeds on the metåte, also something we got from the Mexicans. If there was no metåte, a lommok (mortar) could be used. Now we get cacao powder. This is then made into a paste and from the paste it is formed into little balls or disks, each one enough for a single serving of chocolate. 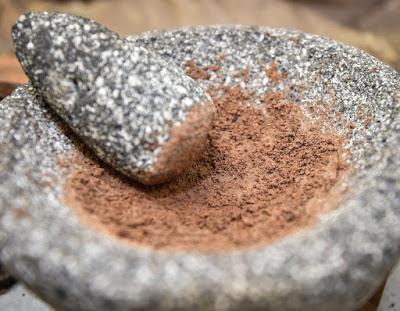 GRINDING CACAO IN A LOMMOK (Mortar)

4. The chocolate balls are heated into a drink by adding hot water and thickened with regular flour or with arrowroot (gapgap) starch, and sweetened with sugar. A battidot (beater) was often used to do the mixing. 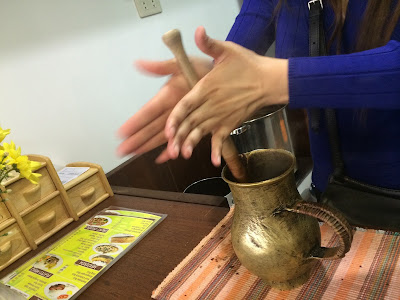 Our court testimony shows that chocolate was drunk as a breakfast beverage, but Safford says that our people drank chocolate in the late afternoon, what we call merienda, an afternoon snack to hold you till dinner at night.

Safford also says that our people gave local chocolate away as gifts to departing friends or family. When a visitor came to someone's house, hot chocolate was often served, along with a biscuit or cake. 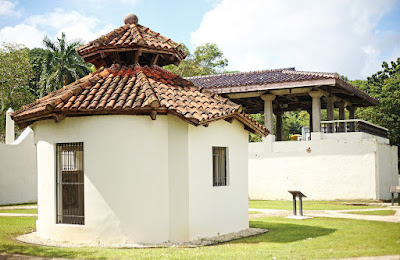 The Chocolate House in the palåsyo complex in Hagåtña is so-named because the Spaniards drank chocolate here as a social event. But period records are also quite clear that it was a custom practiced regularly by nearly all Chamorros. 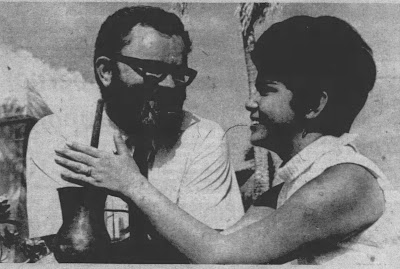 Pat Santos shows a stateside visitor how the battidot is used to make chocolate drink
1969
Posted by paleric at 3:18 PM