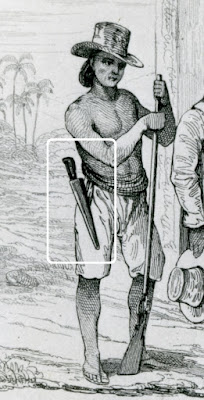 MACHETE AT THE HIP


When your life and sustenance depended on getting food off your own land and at other times from a thick jungle, nothing came in handier than a machete.

With a thicker upper edge that made the whole blade heavy, the machete could cut, chop, slash, split, scrape, scoop and even dig. With the thick, blunt edge, it could even hammer and crush. It could handle animals, all sorts of trees, bushes and vegetation and crack open a coconut. If you needed to protect your life, a machete could help do that.

Europeans brought the machete, as well as all metal implements, to our islands. Even before the Spaniards set up a permanent presence here, passing Spanish and other European ships would trade with our ancestors riding their sakman (flying proas). The Europeans wanted food and drink; the Chamorros only wanted lulok, lulok! Iron, iron! They even knew the Spanish word for it. Hierro, hierro!

I'm sure the machete, or something similar, was wanted by our ancestors yelling "Hierro! Hierro!" to passing ships, besides wanting nails, axes and chisels.

The word machete is Spanish in origin, and it comes from macho, an old word for hammer. This shows you the versatile use of the machete. It could cut but it could also hammer.

We can't discount the possibility that our knowledge of iron hundreds of years ago also came by means of Asian sources, such as China, the Philippines or Indonesia. Choco from China, who predated Sanvitores, knew a thing or two, it was said, about hard metals.

NEVER LEAVE HOME WITHOUT IT

More than one visitor to the Marianas during Spanish times remarked that the daily uniform of every adult Chamorro male included the machete. Chamorro men may not have worn much, due to the climate, but a machete was almost always attached to the waist. Some remarked that you never saw a grown Chamorro male walking around without a machete strapped to his hip.

In time, Chamorros didn't always need someone from off island to bring a new machete. Once the local men learned how to work with iron, they could fashion a machete out of iron. Some Chamorro men specialized in iron smithing and became ereros or fragueros. Erero comes from the Spanish word herrero (iron smith) and fraguero comes from the Spanish word fragua or "furnace."

Because many machetes were made locally from spare bits of metal, many of them had their own distinctive look. The handles could also be unique and thus identify whose machete it was. Court records show that a machete found at the scene could sometimes be traced right back to the owner, due to the distinctive look of the machete. People didn't just leave their machete lying anywhere. Iron was hard to come by, so every machete was valuable and was passed down from one owner to the next, usually from father to son. If you saw a machete just lying around in an odd place, you could expect its owner was in trouble or worse. He wouldn't have just left it lying there on purpose. 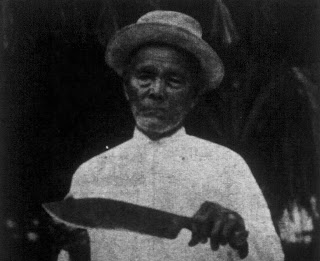 Romualdo Chargualaf Diego from Inalåhan, aged 96 years in 1959, shows a machete that had been in his family for 150 years. It was given to him by his father. The handle of the machete was made from a carabao's horn.

Take a look at what William Safford says about the machete, writing in 1899 :

"Notwithstanding the fact that Don Joaquín is one of the principales (leading citizens) of this island, and occupies the highest social position, he was dressed simply, like any other native, in a loose shirt and trousers, and wore sandals. Hanging to his belt in a leather scabbard was his machete. Conforming to the custom of the natives I also carried a machete - a very good one it is - made by the village blacksmith and armorer of our native guard, Don Joaquin Leon-Guerrero. The blade was fashioned out of a condemned musket's barrel, with the steel from the spring of the trigger - welded in as an edge. The handle is of carabao horn and is inlaid with coin silver."

As you can see, Safford says it was the "custom of the natives" to carry a machete as they went about. It was made locally, using spare metal. And, like Romualdo Diego's machete, the handle was made from carabao horn. Safford was second to the American Governor and was interested in all things Chamorro. 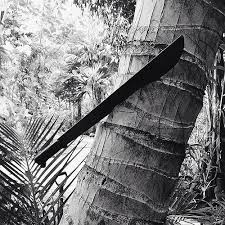 The machete allowed you to cut stepping grooves in any coconut tree so you could climb and enjoy the fruit when needed.


THE MACHETE AS WEAPON

Since the machete was always attached to the hip of a Chamorro male, the machete always posed a danger to everyone else!

Time and time again, the court records of Guam in Spanish days and in the early part of the American period show how the machete could have been used, and was used, as a weapon against people. Two men meet on the road and start an argument. One of them loosens his machete hanging on his waist, as he makes threatening remarks.

Salomón Garrido, the island's prison warden, was mortally wounded with a machete and died from those wounds in 1904. Various people were wounded with angry adversaries carrying machetes, and in some cases people took revenge by crippling their enemies' cattle, slashing them in the legs with machetes.

Recently, two young men were arrested for threatening drivers and damaging their cars with machetes. It's an old tool, but it still does the job, good or bad. That depends on whose hands those machetes are in.

If a machete was used in the commission of a crime, the courts could, and did, confiscate that machete from the criminal and sell it to the highest bidder in an auction? The money would go into the court's coffers.

ANNOUNCEMENT OF A MACHETE AUCTION IN 1908
Posted by paleric at 11:07 AM