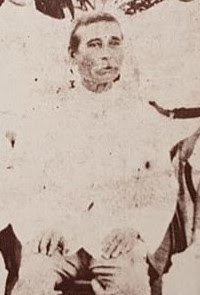 
Even today, many people in our islands die without writing a last will and testament prior to death.

In the past, this was even more the case. There was a Chamorro judge, lawyer and politician I once knew who died in the early 1980s - with no will! He had the profession of helping people draft their wills, and got paid for it, but didn't have one himself!

Many times, the person made known his or her wishes before death, and in many cases this was respected. In many court documents involving land ownership, many people claimed ownership of a piece of land "as inherited by my late father or mother," with no document to show that, and everyone accepted the claim in many cases. But as the American judicial system started to become observed more and more, and when estate issues started to become more contested, things got more complicated.

If the deceased had little to nothing left behind, things weren't complicated at all! But in the case of a wealthy man or woman, it wasn't so easy.

Take the case of Antonio Pangelinan Martínez, who died in 1907 at the age of 68 years. According to the standards of Guam at the time, Antonio was a wealthy man. And he died without a will.

To make matters more challenging, he had numerous children, and some of his heirs didn't live on Guam. So the court had to get involved, and it took six years to settle the estate. There were no squabbles among the heirs, but one administrator of the estate decided to move to Manila, so another had to be appointed. Antonio's holdings had to be appraised, so a committee of competent men had to be appointed by the court to do that. Family members died or moved away in the meantime, changing the dynamics of the process. ANTONIO HAD A CATTLE RANCH IN DANDAN


When the estate was settled, one of the biggest assets of Antonio was his cattle ranch in Dandan, west of Malojloj. Dandan was more or less flat and grassy, and considered an excellent location for cattle ranching. The court divided the ownership of his cattle ranch equally among the heirs. In Chamorro, this is called påtte pareho, or "equal parts." Påtte means "part" and pareho means "equal, the same." This phrase is often heard among families when a parent dies and either the will, or lack of one, distributes the assets equally among all the heirs.

When Antonio died in 1907, he owned the following assets :

Antonio's wealth is visible in that he had two houses built of masonry (mampostería), a mixture of rock and lime, rather than a house made of wood or bamboo. Both roofs were made of tile, not thatched, although zinc was also starting to become more common in roofing for those who could afford it.

Antonio had properties, mostly in central Guam not far from Hagåtña, but that piece of Dandan land in southern Guam used for cattle ranching was also a big asset. He had a large herd of cattle, as well as carabao. Very few locals had a horse, but Antonio did. 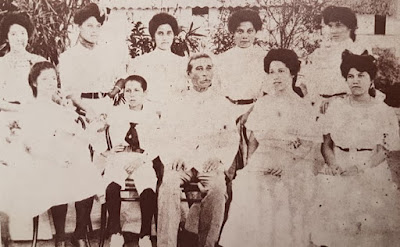 
The court decided there were seven heirs of Antonio; the five children who were alive when he passed away in 1907; one daughter who died before Antonio but who had children who took over her interest; and one grand daughter, the only child of one of Antonio's sons who died before him. The other children who died before their father Antonio died left no heirs. Antonio and his late wife, Eduviges Díaz Wilson, had fourteen children together but some died in childhood or in their youth.

While various lesser goods were distributed to different heirs, ownership of the Dandan cattle ranch was divided equally among the seven. Påtte pareho as far as the ranch went. It was up to each of the seven parties to decide whether to sell their share to someone else or go along with everyone else if they all wanted to sell to another buyer at the same time.
Posted by paleric at 1:00 PM