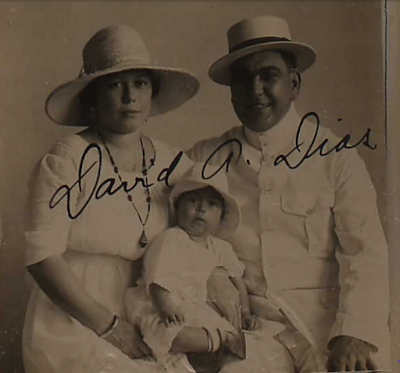 
This one photo is an image of the melting pot Guam was for all its modern history. "Modern" from 1668 to this day.

The woman in the photo has Chamorro blood. And Spanish. And English. And Scots. And Polynesian blood from the Marquesas.

The man in the picture is Portuguese but born in Hawaii.

On his father's side, the baby boy is all Portuguese.

But, a Chamorro biha (elderly lady) living on Guam in 1920, if she asked who the baby's parents were, and heard that the mother was Rita'n Duarte, the biha would've said, "O! Låhen Duåtte!" "Oh! Duarte's boy," and the baby boy would have been considered Chamorro, part of the local, indigenous community. Even with all the extra ethnic lines. Why?

WHO IS THIS FAMILY?

She is Rita Millinchamp Duarte, born on Guam in 1896. Her father was Pedro Andújar Duarte, a Spaniard but born in the Philippines. He became a Spanish military officer and was sent to Guam, where he married María Victoria Anderson Millinchamp of Hagåtña. She was the daughter of Henry Millinchamp, born in the Bonin Islands of an English father and a mother from the Marquesas, in French Polynesia.

María Victoria's mother, though, was Emilia Castro Anderson, so the Chamorro enters in with Castro, and even her father, Juan Cruz Anderson, was Chamorro through his mother, a Cruz.

Adventure on the high seas brought Anderson to Guam, being part of the Freycinet expedition and, according to one account, remaining on Guam because of some past controversy. Proximity to the Marianas and troubles in the Bonin community brought the Millinchamps from those islands to Guam. Spanish military service brought Duarte to Guam. Working for the Cable company brought American David Dias from Hawaii to American Guam. Everyone else in the baby boy's lineage was born here. 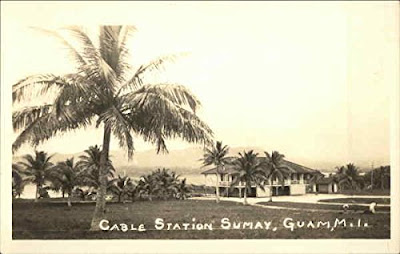 One of the first things the Americans did after they took possession of Guam in 1898 was connect Guam to the worldwide cable system. This put Guam in cablegram communication with the rest of the world. Electrical impulses on Guam were sent via an underwater cable to connection points all over the world and, voila, news and information could be sent and could be received within minutes.

The Cable Station was located in Sumay.

David Dias, born in Hawaii of Portuguese parents who moved there, came to work for the Cable company in Sumay. He met Rita Duarte and they were married at least by 1918, because their baby boy Walter was born on Guam on May 28, 1919.
Posted by paleric at 8:07 AM