THE ELECTION OF ELIAS SABLAN 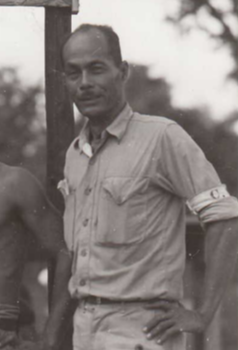 When the Americans took possession of Saipan from the Japanese in July of 1944, they opened up camps for the Japanese military prisoners of war and for the civilians of many races : Japanese, Okinawans, Koreans and the indigenous Chamorros and Carolinians.

The Americans needed indigenous leadership to assist them, and it was a public relations asset to have local leaders in place. America, they said, stood for democracy and they had better give the Saipan natives a taste of it.  The Americans said they were training the local people for future self-government.

An election, therefore, for a mayor (sometimes called "chief" among Americans) was held in December of 1944. Whether by intention or by oversight, only adult Chamorro and Carolinian males were allowed to vote. The women had no vote. Elected was Gregorio Sablan, better known as Kilili'. Then, he passed away in March of 1945.

So, a new election had to be conducted to elect a successor, and what better day for the Americans to hold it than on July 4th. This time, adult Chamorro and Carolinian women were allowed to cast ballots as well as the men. The women had made their displeasure known about being disenfranchised the first time.

Many candidates put forward their names, but there was no overt campaigning. It was not the Chamorro way, said the Americans. No candidates' names were on the ballot, either. The voter him or herself had to write the name of the candidate.

Elected was Elías Sablan, a relative of the mayor who just died. He garnered 670 votes among the 1300 ballots cast. 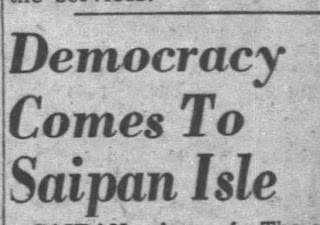 NOT A JAPANESE FAVORITE

Elías was 46 years old when he was elected and had grown up under the Germans till he was 15 years old. He thus spoke German, besides his native Chamorro and Carolinian languages; Carolinian because his mother was Carolinian while his father was Chamorro. It was said that Elías not only spoke Carolinian but both dialects of that language as spoken on Saipan; the Tanapag dialect and the second one spoken by the majority of Carolinians.

His father had served on an American whaling ship, and spent some time in San Francisco when the ship was taking a break. From his father, Elías learned basic English but also a positive assessment of the United States. This was never to leave Elías, who even under the Japanese subscribed to an English-language magazine published in Japan. In the early part of the war, the Japanese put Elías in custody as a suspected spy. Although he was released as there was no evidence that he was a spy, the Japanese kept a wary eye on him as they knew he spoke English and had warm feelings for the US.

So Elías represented it all. He was like a microcosm of Saipan itself. By blood he was both Chamorro and Carolinian, the two local communities of the island. He spoke those languages as well as the languages of all the foreign powers that had ruled and were now ruling Saipan : Spanish, which many Chamorros, especially those from status families and the very religiously devout of that generation spoke, German, Japanese and English. As mayor, Elías could understand and make himself known to everyone on Saipan.
Posted by paleric at 11:51 AM