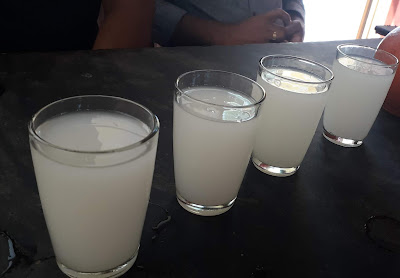 Mariano de los Reyes was a prison guard who was tasked that morning with escorting three prisoners - Juan Pérez de la Cruz (better known as Oto, familian Gåga), José de Toves (better known as Katingo) and Vicente Crisóstomo (better known as Gañote) - to Chaot, just past Sinajaña, where they were to work on some public project. Prisoners were sometimes sentenced to do some hard labor, in addition to jail time, to pay for their crimes.

They had to pass through the barrio of San Ramón and the house of Ramón Díaz Camacho. Mariano, who was a close friend of Camacho, lead the way to Camacho's house, where they stopped for five minutes and each had some tuba to drink, both guard and prisoners.

Tuba is the fermented wine of the coconut's sap.

Five minutes' worth of tuba normally isn't enough to get a grown man drunk. Tuba is refreshing, if not invigorating, in that small amount. Sure what harm could it do? And it was only a five minute delay.

Well, Reyes got hauled into court for dereliction of duty.

His orders were to take the prisoners directly to Chaot and to prevent the prisoners from speaking with anyone on the way. Stopping by Camacho's house and conversing with him over tuba was in defiance of those orders, or so the complaint said.

But the judge decided otherwise. He ruled that, strictly speaking, the prisoners had never fled; that they remained under custody the whole time, and so Reyes never lost jurisdiction over the prisoners.

The judge dismissed the case.

I think today, if DOC guards stopped by Jeff's Pirates Cove for a round of Bud Lite with escorted inmates on their way to bush cutting detail, they'd get in trouble. I think. 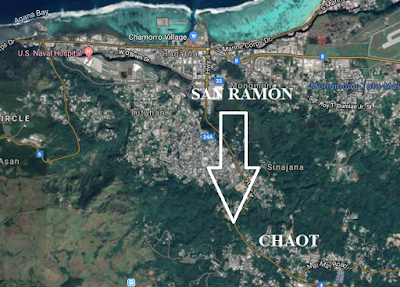 FROM HAGÅTÑA TO CHAOT
with a little tuba along the way
Posted by paleric at 10:32 AM

Email ThisBlogThis!Share to TwitterShare to FacebookShare to Pinterest
Labels: Lina'la'/Life