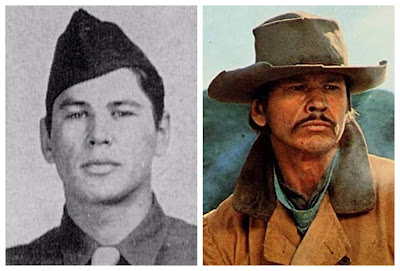 He looked mean, and he was mean (jn some movies).
Charles Bronson, whose movie roles centered on crime dramas, thrillers, Westerns and war movies, enlisted in the Army Air Forces in 1943. Prior to that, he dug coal in the Pennsylvania mines as his father and brothers did.
In early 1945, he was stationed on Guam, flying 25 missions on a B-29 bomber as a nose gunner (though some say a tail gunner). His job was to sit at the nose of the plane and fire at enemy aircraft. Being cooped up in a tiny gun turret was like being in a coal mine again, and he said he always felt claustrophobic in tight spaces. 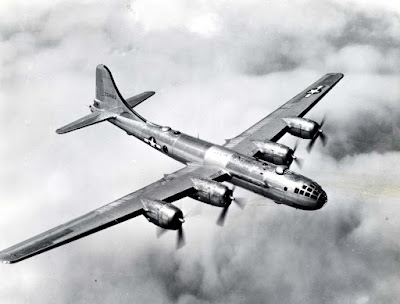 B-29 BOMBER
Bronson's bombardment group bombed Maug, the northernmost island in the Marianas, which, as tiny as it is, had a Japanese weather station.
The group began bombing Japan itself in April of 1945. It took 14 to 16 hours to fly from Guam to Japan and back. 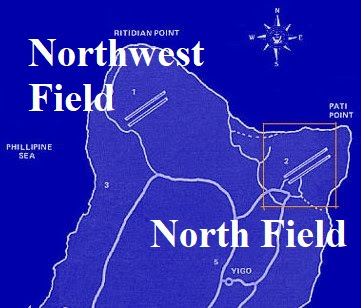 The bombers were based at Guam's new North Field, opened in early 1945. It later became Andersen Air Force Base. The area's Chamorro name is UPI. 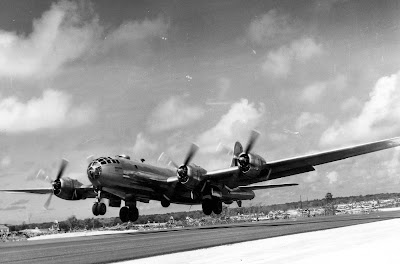 B-29 LANDS AT NORTH FIELD GUAM
From Guam, the B-29s would bomb city after city in Japan, targeting places of military value to the Japanese - airfields, plane factories, weapons factories and arsenals, industrial areas. When Japan surrendered to the US, the B-29s stopped dropping bombs and dropped food and supplies, instead, to allied prisoners of war in their camps.
Bronson was awarded a Purple Heart for wounds suffered in one of the B-29 missions, apparently taking a bullet in the shoulder (or arms, as some sources say).
Unlike actor Lee Marvin who served in Saipan and loved to tell his story of getting wounded there, Bronson did not share his wartime stories and was known for disliking interviews. This explains why we can't say more about Bronson's story on Guam, but he did live on Andersen Air Force Base when it was first known as North Field. 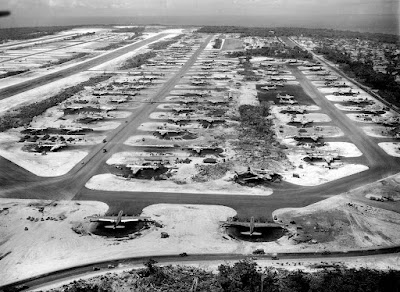 NORTH FIELD
The Future Andersen Air Force Base
Posted by paleric at 7:19 AM