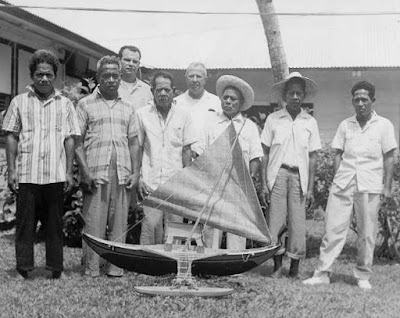 THE SIX ULITHI SAILORS LOST AND FOUND
What was supposed to be a two or three day journey, five hours each way, from Ulithi to Fais, only fifty miles away, ended up being a frightful 53-day lost at sea ordeal, 37 days of them without food.
And Guam served as the hub for the rescue efforts to get the lost sailors back home.
On April 11, 1963, six sailors set sail in a 36-foot traditional outrigger canoe from Fassarai, one of the atolls in Ulithi in Yap State. Their destination was Fais, another atoll some fifty miles to the east. People grew tobacco in Fais and the six sailors leaving Fassarai wanted to trade for tobacco.
The group was lead by Pedro Yamalmai, 34 years old. Three others were from Fassarai : Luis Yoloreg, 45; Pablo Hasgur, 60 and, the oldest in the group, Marcher Yayulfar, 65. There was also Joseph Yormar, aged 62, from another Ulithi atoll called Mogmog. Finally there was Johanes Yguy, aged 42, from Satawal which is not part of Ulithi but it is in Yap State and the two languages and cultures of Ulithi and Satawal have similarities
After ten days at sea and not sighting Fais, they realized they had miss the small atoll and turned back. After some time retracing their route, they saw Fais in the distance, but strong currents overpowered them and pushed the canoe past Fais and towards the west. They tried to sail for Palau, or some other island within the Trust Territory, but when they didn't see any land for days, and with their food and water running low, they decided to head west for the Philippines. 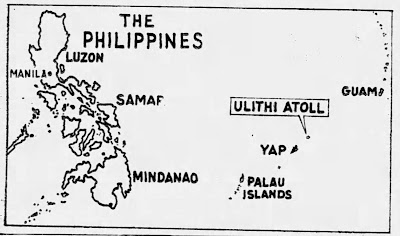 It took them over a month to find the Philippines, some 850 miles from Ulithi, and by day 16 they had no food or water left. They had brought on a lot, but they didn't expect to need two months' worth of supplies for what should have been several days at sea. They still had 37 days to go before finding land. They must have been able to collect some rain water, and eaten some fish straight from the ocean.
Finally, their canoe arrived at Samar, one of the large Philippine islands. They were all in decent shape. No one's life was in peril.
It was not the first time, by the way, that people from western Micronesia ended up on Samar's coast. Mother Nature plays a role, with the trade winds and ocean currents naturally guiding vessels westward from Micronesia. Leyte and Mindanao can also be landing spots for Micronesian canoes lost at sea. This has been going on for hundreds, if not thousands, of years. 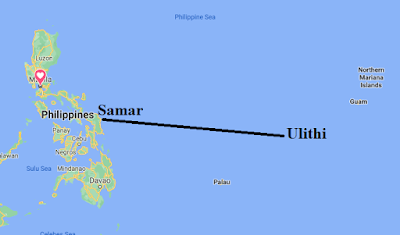 GUAM'S ROLE
Guam entered the rescue scene right away.
Given our geographic location and availability of government and military resources, search planes from Guam went out for 10 days looking for the lost canoe, but with no luck.
When the Ulithi sailors made landfall in Samar, the US Embassy in Manila was contacted. The American officials knew the next step : send them first to Guam.
Imagine these six island sailors who began their voyage in a traditional canoe ended it by flying on a Pan Am jet plane from Manila to Guam. But that's what they did, landing on Guam on June 7, 1963.

Joseph Yormar was the only one who needed medical attention, having injured a foot. He went straight to Naval Hospital. The others went back to Ulithi after a few days on Guam.
ONE THING MISSING 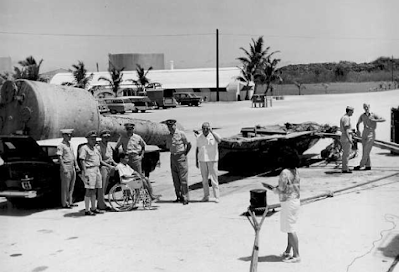 ULITHI CANOE AT GUAM NAVAL STATION
Although the six sailors made it to Guam, their canoe didn't.
That canoe weighed a ton. That's 2000 pounds.
So it wasn't something that could just go on the next flight.
It took a while, perhaps longer than the Ulithians wanted, but the Trust Territory Government and the Commander of Naval Forces Marianas put their heads together and got the canoe to Guam by March of 1964, on board a US Coast Guard cutter. From Guam the canoe was sent to Ulithi.

The canoe was vital to the livelihood of the Ulithian sailors. Without it, they could not go from place to place to trade goods.