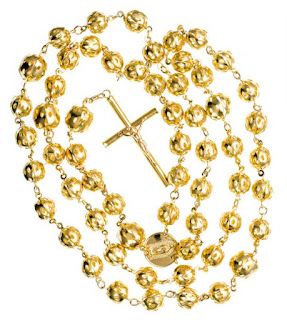 If you've ever gone shopping with older Chamorro ladies, especially when they are on a pilgrimage or otherwise shopping in a religious store, you know that they really go for fancy rosaries.

The more glittering and sparkling the rosary, the more she likes it. It's probably the rosary that will grace her folded hands in her casket when she dies.

This is not a new thing; new as in only since American times. Court documents from Spanish times show that this has been going on for two hundreds years or more.

As simple as life was for most people during Spanish times, even the Chamorro lady who lacked many fancy things often was the owner of a gold rosary. Despite the fact that the Marianas did not have ships bringing in imported goods frequently; despite the fact that we had few "stores" to speak of in Spanish times, many of our people did have jewelry, watches and.....gold rosaries.

Gold rosaries show up in court documents over a hundred years ago in the Marianas in surprising frequency.

A last will and testament states that a gold rosary owned by the deceased is to be given after death to a certain daughter in the family.

A complaint is filed in court against a platero (a silversmith) for failing to replace beads in a gold rosary as the owner had requested.

Another complaint is filed in court alleging that so-and-so stole a gold rosary when the alleged thief was employed as a house servant.

That stolen gold rosary passed to no less than three different buyers until the matter was brought to court.

In another case involving the payment of a debt, a debtor includes a gold rosary as part of the payment. 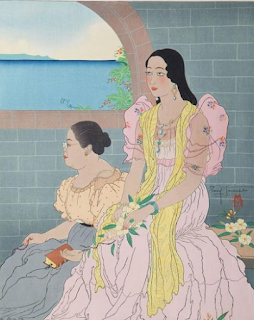 Gold rosaries were highly prized by Chamorro women
Posted by paleric at 10:14 AM