THE EL DORADO OF RECRUITS 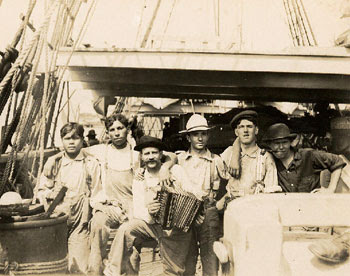 Someone writing for a newspaper in 1849 called Guam the "El Dorado" of recruiters.

He meant whaling recruiters, looking for young men to replace dead, sick or deserted crew members on the whaling ships that crossed the Pacific and beyond.

Working on a whaling ship was miserable. One whaler said, "We have to work like dogs and live like pigs."

So, it's no surprise that many crew members left the ship, unauthorized, when they pulled into a new port. Whaling captains were always looking for replacements, and Guam had a reputation for being an easy place to find them.

Thus the remark El Dorado, the mythical city of gold which was later applied to any place of fabulous wealth or opportunity. The Marianas did not have gold or silver, but it did have young men dying to leave island and join the whaling ships. And not just whaling ships. Even merchant ships recruited men from Guam.

Just take a look at these Guam maritime recruits from one single year, in 1868. There is one man with an unfamiliar surname, Gioto. Either he was not Chamorro and just happened to be on Guam in 1868, or someone spelled his name wrong. There is also a man surnamed Pelayo. He could also have been non-Chamorro but was on Guam at the time.


Martín Dueñas and Juan de la Cruz were recruited to go to Asención (Ponape) by Captain Bell of the American merchant ship Aguila.


Leocadio Gogue and José del Rosario were recruited on the Anglo-American whaler Acorn Barnes under Captain Jeffries. "Anglo-American" means the ship was owned by a joint British and American company.

The majority of these men, from the looks of their surnames, would have been Hagåtña residents. Materne might have come from Aniguak. Taijito from Asan. Namauleg could have come from Hagåtña, Aniguak or Asan. Perhaps some from Sumay. But there are no Babautas from Hågat, Afaisens from Inalåhan, Quinatas from Humåtak, or Nangautas from Malesso' on this list, for example. I don't see any Luta names either, although a few men from Luta did get recruited in the 1800s. 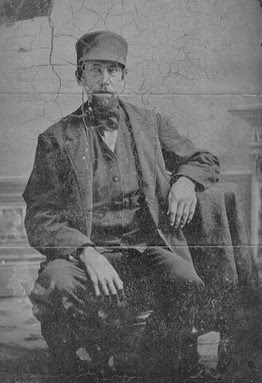 A whaling captain of days gone by
Posted by paleric at 8:41 AM