When the Spaniards forced the Chamorros of the northern islands (collectively called the Gani islands) to move south to Guam and Luta from 1695 on, those islands became depopulated, but not entirely and not for all time.

Even as I write this, or as you read this, there are small numbers of people living on Agrigan, an island that was evacuated in 1990 when the volcano started smoking, though no eruption occurred.

People have started to move back, little by little. But the lure of Agrigan has been there for a long time, and not just for people of the Marianas.

In 1810, a man named Johnson lead of group of four white men, two black men and twelve Hawaiians (we're not totally sure about the precise homelands of these 12) sailed to Agrigan to settle there, empty as it was and far enough, so they thought, from the Spaniards in Guam. But, far though Agrigan may have been, the Spaniards would not tolerate this colony and sent armed men up to Agrigan to round them up and bring them to Guam.

Just five years later, in 1815, the Spanish had to deport another colony in Agrigan made up of three Englishmen, one American and thirty-some Hawaiians.

In 1818, a group of shipwreck survivors who found safety in Agrigan had to be taken down to Guam.

A French settler in the Bonin Islands, north of the Marianas, by the name of Leseur, took a wife named Pidear, "a native of Grigan, one of the Ladrones." Agrigan was often spelled Grigan by English/American writers in those days. I suspect that Pidear was a Polynesian in one of the earlier groups that had lived briefly on Agrigan.

Then, in 1859, a ship was sailing from San Francisco, California to Hong Kong and passed in between Pagan and Agrigan. One of the mates on board remarked that he had been on Agrigan in 1849, and said there were two Caucasians and seven islanders living there. The comment didn't specify what kind of Caucasians or islanders they were. 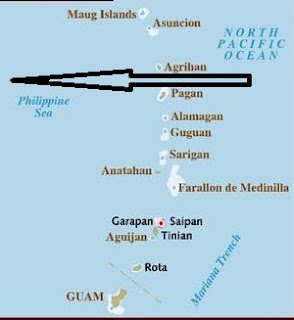 The Spanish government and independent businessmen later tried to exploit Agrigan for copra, and the German and Japanese governments opened up the island to human settlement for that purpose as well. In 1960, there were 113 people living on Agrigan. The number of residents continued to drop until in 1990 they all left due to possible volcanic eruption.

People are still trying to get to Agrigan today, especially since the US military has expressed interest in using the northern islands for target practice. Putting people on these northern islands, they think, will make that impossible to do.
Posted by paleric at 11:45 AM