WHEN TALOFOFO RIVER WAS A BORDER 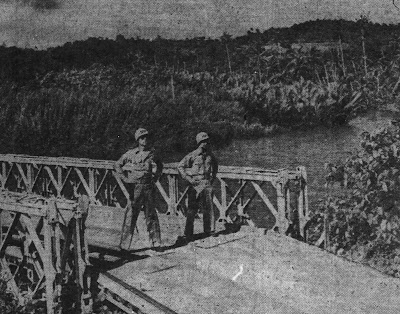 
The Americans may have taken Guam back from the Japanese on August 10, 1944, when General Geiger announced that organized Japanese resistance had ceased, but that didn't mean the island was safe from Japanese danger. Over 7000 Japanese troops were believed to be hiding in the jungles when the battle for Guam ended.

A line was drawn from Fadian Point (north of Mangilao) on the east to Tomhom (Tumon) on the west. The US believed the great majority of Japanese holdouts were north of this imaginary line. They wanted to make sure the Japanese did not venture south of the line.

But, in fact, there were Japanese soldiers hiding in the south of Guam. The last known one (Shoichi Yokoi) was found twenty-eight years later, in 1972!

The military government then decided to create a kind of a border to the extreme south of Guam at the Talofofo River. Guards were posted at the temporary, postwar bridge which replaced the prewar one destroyed in battle. The guards were there for two reasons. First, to keep American military personnel out of the extreme southern villages of Guam : Inalåhan, Malesso' and Humåtak. Even in the other villages and civilian camps, military personnel needed passes to enter. Keeping the military and civilian communities separate was good for everyone's safety. The US military brass knew that service men would be very interested in socializing with Chamorro women. In a supervised setting, like in a dance with eyes on the watch, there'd be less chance of any mishaps. But servicemen running free, looking for female companions in the villages, might create problems. Cases had already happened when this was the case.

In the extreme south of the island, far from military bases and airfields which were taking up so much land in central and northern Guam, the Chamorros could continue living their peaceful, farming lives as if war had never happened. There were no military installations in the deep south of Guam. American service men, therefore, had no business there except on a few, authorized occasions.


Secondly, the guards at the Talofofo bridge ensured that any American servicemen who did have authorization to cross the bridge had a weapon. The countryside was still too dangerous for them to travel around unarmed. For several years, Chamorro ranchers would find missing chickens and stolen vegetables on their farms, the work of Japanese stragglers marauding for food at night.

You may ask why wasn't there a similar border crossing on the western side of the island, as in Hågat. The answer is simple. There was no road from Hågat to Humåtak in 1945! Nor even before the war. Look at this wartime map of Guam. From Hågat to Humåtak, there is no road. Before that road was finished years after the war, the only way to go from Hågat to Humåtak was by boat or by driving to Yoña, then Talofofo then Inalåhan then Malesso'. Going that way was even faster than by boat!

So there was no need for guards at Hågat. No one was interested in walking up the mountains over to Humåtak, or riding a cart pulled by very slow and uncooperative cows or carabaos. 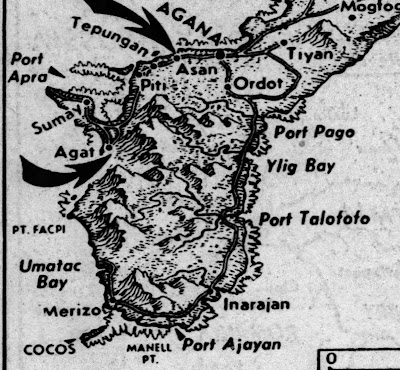 The border didn't last, of course, and in time anyone could go any where they pleased, except of course on base. A newer, wider bridge over Talofofo River was built, to be replaced several times as the years went by.

But isn't it true that there is a kind of an invisible border still, once you pass Talofofo river, or Hågat on the other side of the island, and enter the deep South. I used to live there, and I always enjoyed the feeling of being in a less rushed, more peaceful and more neighborly part of Guam.
Posted by paleric at 8:40 AM