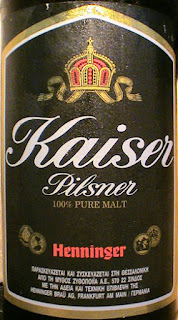 People on Guam were able to enjoy imported German beer very early in the American administration, at least for a year or so.

A German entrepreneurial adventurer from Dresden named Paul Ferdinand Gustav Dachsel was already in business selling German beer on Guam in 1905. He sold it out of a restaurant he ran on Calle de la Soledad in Hagåtña called the Palm Garden. He served German beer in his restaurant, but he also sold beer to other businesses and private customers.

He sold German beer to the Hiki Trading Company, a Japanese business which probably sold the beer retail in its store. He sold beer to the Service Club for military patrons and also to two private clubs for the American colony on Guam, the Agaña Club and the Civil Club. He supplied the hospital mess hall with beer and one of his private customers was none other than Padre José Palomo, who once bought 200 pesos worth of beer. Be aware that a case of beer cost 14 pesos. Either Palomo liked beer or entertained a lot of guests, or both.

Dachsel bought the beer in Yokohama, Japan and had it shipped down to Guam.

Some of the specific brands he sold were Kaiser Pilsner, Kieler Tafelbier (a "table beer" lower in alcohol than the others) and Hofbrau München.

Prior to coming to Guam, Dachsel had tried to make a go of farming in Saipan in 1904, after hearing from Hermann Costenoble, the first German private citizen to move to Saipan in 1903 to seek his fortune. Both Dachsel and Costenoble experienced the opposite, having disagreements with the German colonial authorities and soon leaving Saipan for American Guam.

Whereas Costenoble stayed on Guam for a while, Drachsel didn't. By 1908 he was running a restaurant in China, in the port city of Tsingtao which the Germans controlled. If you've ever heard of a Chinese beer called Tsingtao, now you may have figured it out. That brand was founded by German and British businessmen in Tsingtao, China. 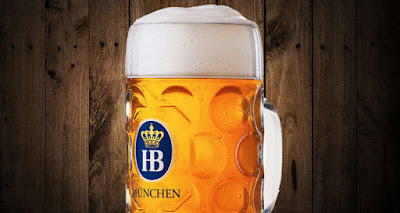 Another brand sold by Drachsel on Guam
HOFBRAU MÜNCHEN