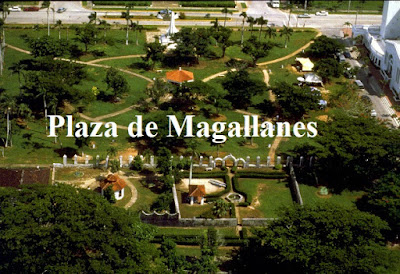 Everybody today knows it as the Plaza de España. If we were to render that in English, Spain Square.

But it wasn't called that originally, not even by the Spaniards!

They called it the Plaza de Magallanes. Magallanes is the Spanish form of the last name Magellan, after Ferdinand Magellan, the first European that we know of who made contact with our islands. That happened in 1521, just 19 years after Columbus bumped into what we now call the Americas. 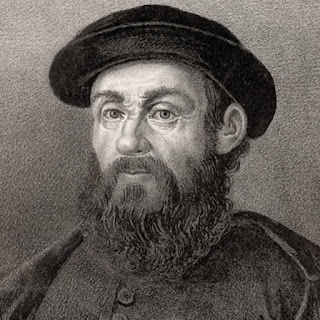 
Ferdinand Magellan was Portuguese by birth, and his last name in Portuguese is Magalhães.

When Chamorros learned of the Spanish version of his name, Magallanes, they pronounced it the Chamorro way. In Chamorro, we do not have the Y sound as in "yellow." Our Y is like Yigo or Yoña. In Spanish, double L (LL) has the Y sound like "yellow." In Spanish, Magallanes sounds like ma - ga - ya - nes. But our Chamorro elders pronounced the Y like the Y in Yigo or Yoña. 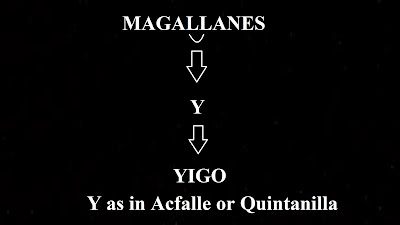 THE PLAZA UNDER SPAIN

The first Governor's palace (palåsyo) in Hagåtña was built in 1736 so we can assume that a plaza of sorts was laid out in front of the palace. It was really just a big, empty space. At times, paintings and sketches suggest it was surrounded by hedges or even crops. We do know that, since it faced the palace, it was where people gathered to listen to special announcements from the Governor or to celebrate some events.

But, more or less, it was just an empty space. Not much going on on the site itself, except there seems to have been a cock fight done there every Sunday afternoon. It didn't always have straight four lines like a square. 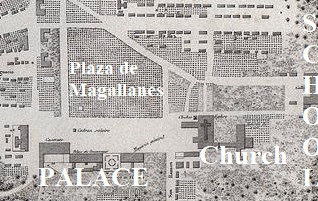 The Plaza in 1819
Not a true four-sided square

It was the Americans who started calling it the Plaza de España. Maybe Magallanes was too hard for them to say.

They were also the ones who built the kiosko (gazebo) in the center, various times, even beginning with a thatched roof one. The kiosko served as a bandstand at times and the military band played there weekly.

The Plaza has been the location of several important events in recent history. This is where members of the Guam Militia, Chamorros, shot their machine gun at the invading Japanese on December 10, 1941. This is where the Japanese made the American Governor and Spanish bishop strip to their underwear and run around the Plaza in order to show the Chamorros who was in charge now. This is where a Chamorro-organized protest against George Tweed was held. The Plaza has been the site of inaugurations, weddings, social events, political rallies and even movie and TV filming over the years.

BE CAREFUL WITH WIKIPEDIA

The people who write the articles are human, so mistakes are bound to happen. And it happened with the wikipedia article on the Plaza de España in Hagåtña.

Whoever wrote the wikipedia article used information from the nomination of the Plaza to the national register of historic places. In that documentation, it is stated that the Plaza was originally named after Magellan, in Portuguese Magalhães.

While it is true that Magellan's real name, his Portuguese name, was Magalhães, the Spaniards called him Magallanes, not Magalhães, and so the Plaza was never called the Plaza de Magalhães, unless a Portuguese were writing or speaking.

Secondly, the author of the wikipedia article may have thought that Magalhães in the nomination was a typo. He may have thought that magalahes (chiefs / governors) was meant. That is not the case. It was never called the Plaza de Magalahes. In Chamorro, we do not make words plural by adding an S, as we do in English or Spanish and other languages. And in documentation from Spanish times never do we ever read about a Plaza de Magalahes. Plaza de Magallanes, yes. The author was confused by Magalhães, the Portuguese form of Magellan/Magallanes. The ~ over the A in Magalhães is a clue. The ã is a letter used by the Portuguese, but not by the Spaniards.