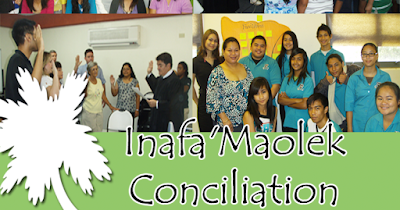 
Here is another example of how language changes over time.

In every language, the meaning of words changes as new generations add to the possible meanings of a given word.

In Chamorro, take, for example, the word AFA'MAOLEK.

But, as the video below shows, the older meaning was : reconciliation. Two former adversaries make peace. That is inafa'maolek, in its original meaning.

The term can be broken down into parts. The foundation of the word is maolek, which means "good."

The assumption here is that there had been something "bad." A disagreement, a fight, some injury or injustice. Hence the prefix "to make." Something had to be done to make peace, to make good, because prior to the fa' maolek something had been bad. It's bad, so make it good!

Let's listen to these older women, all in their 70s and 80s, point this out. In the traditional and older understanding of the word, inafa'maolek presumes that enmity or hostility needs to be "made good."

1st lady : She says that it means to make good what was once "broken" (ma yamak) between two people.

2nd lady : She mentions that the two parties had been fighting. Ginen mumu,

3rd lady : She uses a word hardly known anymore - plaito. It means "argument, discord, controversy" and the like. From the Spanish word pleito which means the same.

4th lady : She speaks in English and defines it as "making peace."

5th lady : Once again, having had a fight is mentioned.

When two people make peace, then they start to help each other. So people started defining inafa'maolek as all those other things that result from peace making : mutual assistance, reciprocity, interdependence and so on.

But the original meaning always includes a prior state of enmity between two parties, which they then repaired (fa' maolek).

In fact, whenever someone uses fa' maolek with their car, for example, the listener always takes it to mean that the car was repaired. Or, with a sick person, fina' maolek means the person was healed. The presumption is that prior to the fa' maolek, there was a negative condition. A car was broken, a person was sick.

Once again the foundation of the word : It's bad, sick, broken, at war! Make it good! Fa' maolek!
Posted by paleric at 7:58 AM