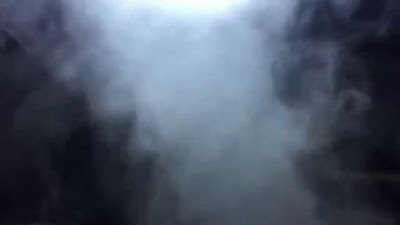 Either term is used by some older people to describe a sheet or ball of mist rolling or floating in the distance.

Balutan means "a bundle" or "a bale." It can also mean food that is packaged, but not only that. Many different things, besides food, that are bundled up, packaged or gathered together can be balutan.

When people saw a mist in the distance, in the old days, the elders would tell everyone to make the Sign of the Cross.

I have even spent the night in allegedly haunted places. But I have never seen or heard a ghost. I joke that the ghosts don't like me. I feel discriminated! Kidding.

But, many years ago, I did see a very unusual mist. Not only I, but two other friends saw it, too. Here's what happened :

It was during the summer of 1982 or 1983. I was 20 or 21 years old. Two of my friends, around the same age, picked me up one night. We didn't know what to do so we decided to just drive down South. In those days, driving South was a big deal.

I was sitting in the back while the driver and my other friend sat in front. At one point, as we were going up the hills just after you pass Agat, I leaned forward and rested my elbows on the back of the driver's and passenger's seats so I could listen more closely to and talk with the two up front.

In those days, more than now, with the old, two-lane road, there were a lot of dips and crests. You really went up and down on that old road, especially on that stretch by Mount Lamlam.

Just as we reached the top of a crest, and were about to go down into a dip, right after we passed Mount Lamlam to our left, our conversation stopped but I was still leaning forward. There was complete silence. Not even the radio was on.

As we were on the crest, we could see the high ground of the next crest. Just as our car was turning down into the dip, I saw a hazy, whitish reflection on the road on the little hill just before us. It was not blowing; it was stable. But it shimmered. There was a slight vibration or movement to it. And it seemed to have a defined, rectangular form. At first I thought our headlights were beaming onto the side of a cow stuck in the middle of the road. I thought it had better move or else we would crash into it.

Then, all of a sudden, the entire mist, as a single body, swooshed ever so gracefully to the right, going into a thickly wooded valley. It moved as if it were the body of a cow, except that I didn't see any legs, tail or head. Plus the fact that I could see through the mist and see the asphalt road behind it. It couldn't have been a cow, or any animal for that matter. It was a mist, a såbanas å'paka' or balutan å'paka', except that it behaved very strangely. Stable, yet shimmering. When it swooshed to the side, it didn't have an awkward start. It moved like an animal moves when it makes up its mind to get out of the way of a car, except that this mist moved faster than any cow could. The mist seemed, for lack of a better word, "alive." It didn't evaporate; we didn't drive into it. It swooshed gracefully out of the way, to the right.

I kept silence, thinking I was the only one who it. But my inner reaction was just too strong that it had to come out. And so did the other two, because all three of us at the same exact time, just seconds after seeing this mist, blurted out, "Did you see that?" And we all described what we saw, and we all saw the same thing.

The next day, I shared this experience with someone and he said that there are many trails in the country side of the island used by the ancient spirits. Perhaps, he suggested, the mist was one manifestation of these spirits, as a trail could have gone from the mountains, across the road, into the valley and down to the sea.

I have no idea what I saw and what caused it, and I won't draw any conclusions. For all I know, it has a perfectly natural explanation. It is a lost moment, which I cannot retrieve and put under a microscope for analysis. All I have is a memory of something very startling and puzzling. 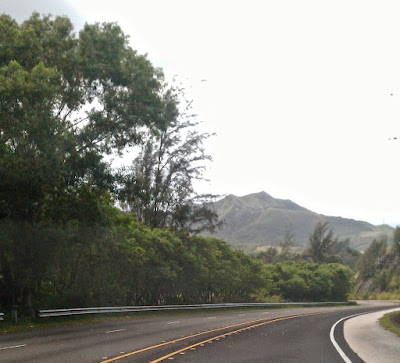 The road heading south to Humåtak, just past Mount Lamlam