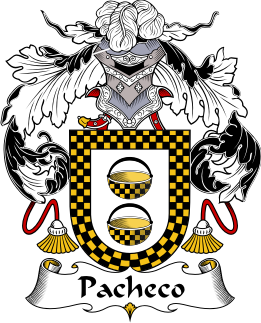 There used to be a family on Guam called the Pachecos.

As far back as 1727, there was a Filipino soldier on Guam, very likely from Pampanga, named Pedro Pacheco. He was part of the Pampanga regiment, but it is also possible that he came from another part of the Philippines.

In 1727, he was still unmarried. But, in the 1758 Census, he had been married and was now a widower, with possibly nine children.

Five of those nine children were still unmarried in 1758 and living with Pedro. They were Francisco, Alejandro, Miguel, Domingo and María.

His married children were :

Then there were three married daughters. Ignacia, who married the Filipino Pedro de Herrera; Bárbara, married to a man from Pago named Simon Taichigo; and María Agustina, who was widowed in 1758, having been married to a man named Cruz.

There was another Francisco Pacheco living in Humåtak, whose mother was María Taitingo. What relation he had, if any, with Pedro Pacheco of Hagåtña, is unknown at this time.

There was also a man named Pedro Pacheco from Pago, but whose parents seem to have been "pure" Chamorros, Carlos Lalalo and Juana Taasi. It was sometimes the case that a baby received, not only a Spanish first name, but also a Spanish surname as well.

Given that the older Pedro from Hagåtña we first mentioned had five sons, you would think that the Pacheco name would continue up to the present. But it didn't.

By 1897, there was only one person on Guam having the last name Pacheco.

Her name was Cipriana Pacheco, and she was married to José Finoña. Thus, the Pacheco name was to last just one more generation, as the maternal last name of her children, who all carried Finoña as the paternal last name. The Finoña would survive, but the Pacheco would not.

In fact, the Finoñas who are descendants of Cipriana Pacheco are the Familian Englis today.

Many years ago, I did the family tree of an elderly lady from the Familian Englis, and when I explained that her great grandmother was named Cipriana Pacheco, she said she had never heard the last name Pacheco before.

Scholars believe that the last name Pacheco started in Portugal and then some Pachecos moved to Spain, where it is found today, especially in the south and in the parts closest to Portugal. They are not sure what the name means or how it started.
Posted by paleric at 7:17 AM