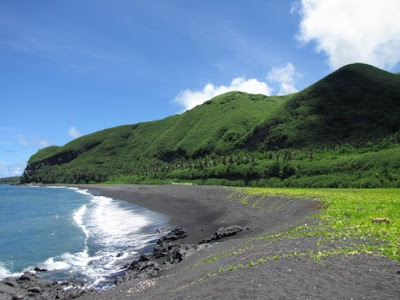 
...or Pagan. Not the picture. But the place of work. The picture is definitely Agrigan.

An Englishman named H.T. Williams tried to make money here in the Marianas in the 1880s. He was up in Saipan in 1885 seeking money-making opportunities and one way to make money in those days was through the sale of copra, the dried meat of the coconut. The oil extracted from the dried meat could be used in a variety of products that needed a dose of oil in them. Think of soap, for example.

Copra production was found everywhere in the Marianas but the boon to doing it in the northern islands, like Agrigan or Pagan, was that there were no property owners! It was all government-owned, and an entrepreneur only had to secure approval from the Spanish government to lease the entire island. Williams was not the only one to seek his fortune in northern islands copra.

Williams recruited forty Carolinians living in Saipan to work on the coconut plantations in Agrigan or Pagan that year. The contract stated that the work period would not exceed fifteen months. The men were to be paid three pesos per month, with a six peso advance. Williams was to provide for their daily meals and to transport them back to Saipan within that fifteen month period.

Why Carolinians? There were indeed Chamorros living on Saipan in 1885 but, at that time, the Carolinian community was still the majority of the Saipan residents. Saipan had zero human residents from around 1740 on, thanks to the Spanish policy of relocating everyone north of Luta to Guam or Luta. It was just the birds and animals on Saipan for the next seventy years or so.

Around 1815, Carolinians were allowed by the Spanish government to settle on empty Saipan, and the Chamorros (mostly from Guam, a few from Luta) followed behind them in very small numbers. The Chamorro population began to soar by the end of the 1800s and by the early 1900s the Chamorros became the majority of the Saipan population.

But, in 1885, it was still a Carolinian majority and they were available for hire. The Chamorro settlers were busy tending their own farms; too busy to be hired in big numbers to help other ventures. The Carolinians at that time did not farm in the same way the Chamorros did, with their almost 200 years of Spanish experience with the plow and hoe. The Carolinians fished and planted in the old, island way; yam and taro. Other foods, like breadfruit, didn't even planting. Just pick them off the tree when edible. Less time was needed for these, compared to western farming, and so there were Carolinian men available for hire. 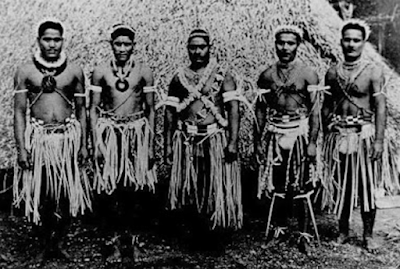 We have the names of the Carolinian men hired by Williams in 1885. Many of the family names are still around on Saipan to this day. I am listing them here in the way their names are spelled in the document. Keep in mind that the spelling comes from Spaniards (and Chamorros) who heard the Carolinian names with their Spanish and Chamorro ears. Thus, the spelling. I am also putting the more modern way of spelling these names.

Included in the list is one man from Satawal, spelled Sataguat, which would be the Chamorro way of pronouncing Satawal. Satawal is one of the many islands where the Carolinians of Saipan originated. In other words, this man from Satawal was from the same ethnic group as the Saipan Carolinians. But he is not baptized; otherwise, he would have had a Christian first name, as all the others do.

Matagolai is a name many people think is Chamorro, since it's a coincidence that it seems to be made up of two Chamorro words : måta (face/eyes) and gollai (vegetables). But an older Carolinian told me in the 1990s the way it is pronounced in Carolinian, and documents show that the first Matagolai recorded was a Carolinian.

Some of the more familiar last names to me here are Rabauliman, Olaitiman, Satur, Rogopes, Taman (Candy, the singer), Kaipat, Rogolifoi, Rangamar, Kapileo, Lisua, among the others. Saralu calls to mind the Saralu singers. Malua Peter, a well-known lady in Saipan, is from the Angailen clan. There is an area on Saipan called As Rapugao, after the family. A lady from the Parong family married into the Chamorro Sablans, which gave birth to one of Saipan's mayors after the war, Elías Parong Sablan.

If there are other names that are spelled differently today, leave a comment.

What we have is a document spelling out the contract between Williams and these hired men. Whether they actually did go to Agrigan and completed their work is not known (yet).

When the contract needed to be signed, the names of the Carolinian men were all written down by the Chamorro clerk. But the Carolinian men could not sign their name; they had not been taught to read or write, since they lived the traditional, island ways from before the Europeans' arrival. Even up to American times, a good number of Chamorros, especially the women, could not sign their names as well.

So, instead, they made a cross with the pen on their names, which the clerk pointed to. Some people think this is where the last name "de la Cruz" comes from, which means "of the Cross." This may have been true in some cases, but not in every case, and, I suspect, not in the majority of cases. If that were really the case, then all these Carolinian men would have then become known as "de la Cruz" since none of them could sign their names, but only draw a cross next to their names. 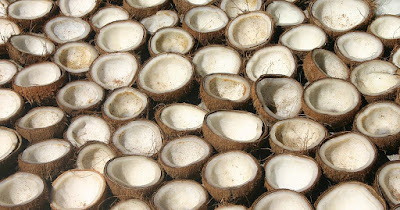