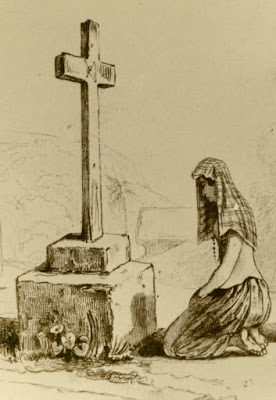 A Chamorro Woman kneeling before the Cross
Early 1800s


From the very beginning, the Catholic missionaries promoted the veneration of the Christian Cross among the Chamorros. The early Spanish missionaries called the Cross the båbao Yu'us in Chamorro, meaning the "emblem, standard or banner" of God.

Before long, large crosses were placed all over the island. A whole section of Hagåtña was named Santa Cruz, which means "Holy Cross" in Spanish. In Chamorro, "Holy Cross" is translated to "Såntos Kilu'us." When people would pass a Cross on the roadside, they would take off their hat, bow or pay some sign of respect. More devout souls would kneel and pray before them. 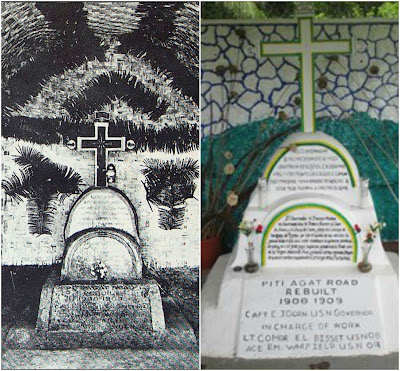 The Santa Cruz at Atantåno'

The oldest Santa Cruz (Holy Cross) that remains intact to this day is at Atantåno', a low-lying and swampy area just before the main gate at Naval Station, before one makes the left turn to continue driving to Hågat or Santa Rita. The cross was possibly erected in 1785; the same time the road that ran in front of it was built. If not, then it was erected in the 1800s when, it seems, a commemorative marker was placed in this spot. The area was used for the production of coconuts (copra) and rice.

During the Spanish colonial period, May 3rd was the Feast of the Finding of the True Cross. That feast commemorated the discovery of the true cross on which Christ died by the Empress Helena.

A few families are so devoted to this promesa that they have built small chapels to the Santa Cruz as permanent structures, usually on the side of a road. They are usually simple, but are cleaned up and decorated before the start of the novena.

Here are some photos of just some of the private, family-owned Santa Cruz chapels found on Guam. 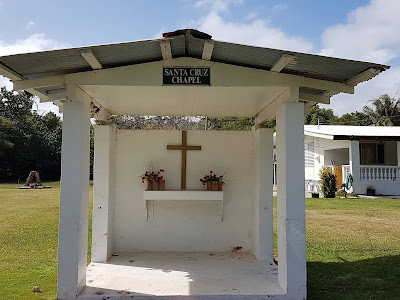 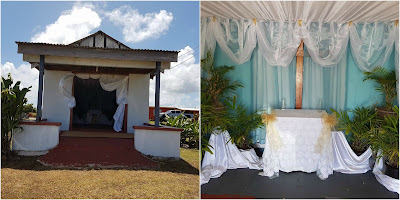 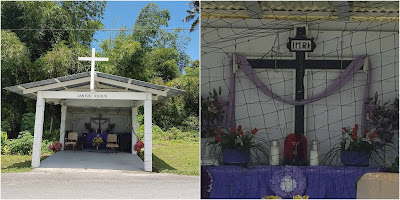 
Besides family-owned, private chapels of the Holy Cross, some churches erected large crosses in front of the parish church.

In this picture, we see, on the left, one such large cross in front of the pre-war Sumay Church. In the picture on the right, a modern cross sits across the street from Humåtak Church. This cross was built by the late Jesus "Pat" Quinata at the direction of Påle' Eric in 1997. 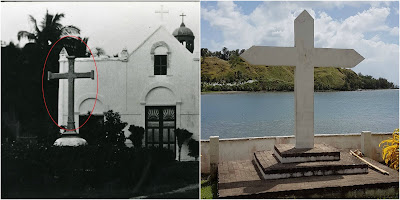