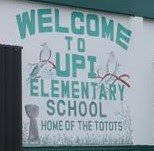 There is disagreement going on right now about renaming Upi Elementary School.
Some want to rename it after the late master ifit carver Robert S. Taitano, who, besides his significance as a cultural arts practitioner, didn't live far from the school.
But others, especially those connected to the school, want to keep the current name of the school.
Having no connection whatsoever to the school, it is not my purpose to weigh in on the matter. But I do want to clarify some statements made by some people that need it. As I didn't hear these people make these statements, and am relying on media quotes, one has to ask if they were quoted accurately.
Nonetheless, someone is reported to have said that Upi is "simply a street name that stands for Northwest Field." This is not accurate. Long before there was a small Upi Street in Yigo (not even where Upi Elementary School is), there was a district of northeastern Guam called Upi. And Upi is not in the northwest of Guam but in the northeast, nowhere near Northwest Field. 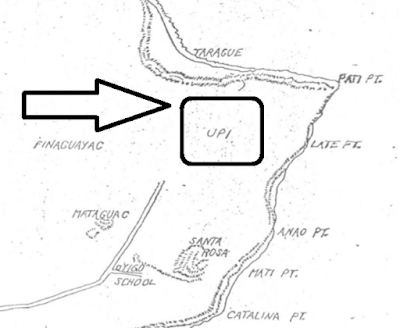 This map based on a 1902 Guam map shows the traditional location of the area called Upi. It is exactly where Andersen Air Force Base sits today.
Thus, the second alleged statement by another individual, that "Upi was actually named after a cluster of homes in the Tarague area" is also in need of clarification. Upi is an area just south of Tarague, but it is its own area, distinct from Tarague.
AN OLD CONTROVERSY 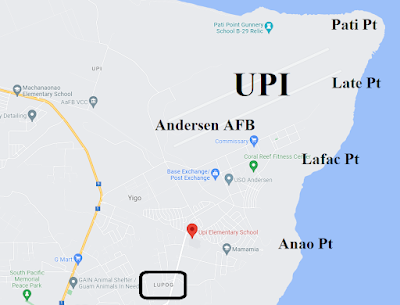 As seen in the 1902 map, Upi is way at the northeast corner of Guam. Looking at the areas near it, one sees that Late Point is adjacent to Upi. It is definitely north of Anao Point. Upi, properly speaking, is exactly where the air fields of Andersen Air Force Base are.
Upi Elementary School is located well south of that. The school is adjacent to Anao Point.
So Upi Elementary School sits in between Upi and another area called Lupog, just north of Mount Santa Rosa. 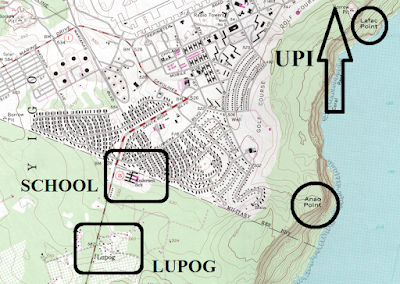 So a better case might be made that Upi Elementary School resides in Lupog, as the map indicates that the school is much closer to Lupog than it is to the air fields of Andersen Air Force Base, which is definitely Upi.
BUT.....
Who says a building or institution has to sit in the geographical location it is named for?
After all, there are many bakeries called Paris Bakery, and grocery stores called Manila Food Store, that are neither in Paris nor in Manila.
Buildings and institutions can be named after places, people and events that mean something to those who use the building or are part of the institution.
And, in the end perhaps, it is they, the users and participants, who ought to decide, since it is they who will have to live each day under that name.
Posted by paleric at 1:02 PM