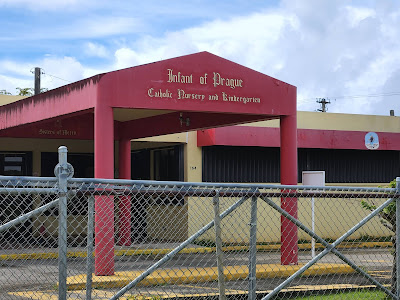 INFANT OF PRAGUE CATHOLIC NURSERY & KINDERGARTEN
Tå'i, Mangilao
Nurseries, pre-schools, kindergartens and day care centers abound on Guam today, a reflection of modern times when both parents work, or perhaps there is only a mom and she works, so someone needs to care for the little ones during working hours.
In the old days, most families were huge and multi-generational. There were more than enough grandmothers, single aunts, nieces and older sisters to care for the young.
But in 1952, the Mercy Sisters opened Guam's first nursery, where parents could drop off their pre-school children and the Sisters would care for them and begin to educate them. 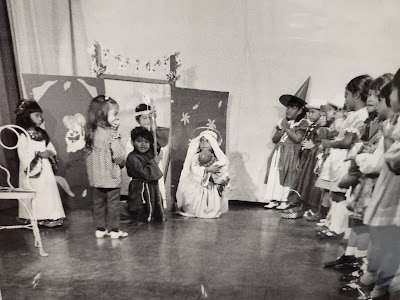 CHRISTMAS PLAY AT INFANT OF PRAGUE
The Mercy Sisters had moved into their new convent in Tå'i, on church land next to Father Dueñas Memorial School and Seminary, in 1951. In 1952, Sister Redempta Thomas, a stateside Sister and Mercy superior for Guam, decided to open a nursery on land just down the hill from the Mercy convent. A nursery would provide the Sisters with extra income to meet their financial obligations for a rapidly increasing community. Not all the Sisters were inclined to teach in schools; some worked better with pre-school children. Guam was also changing. More parents by then were living in nuclear family houses, without the extended family around to help watch the children, so a nursery was helpful to the parents who could use that help. An early start in their child's education wasn't a bad idea, either.
A permanent concrete building was completed in 1959 which still remains, but it has been added to and improved more than once over the years.
LIFE AT TÅ'I NURSERY IN THE EARLY YEARS 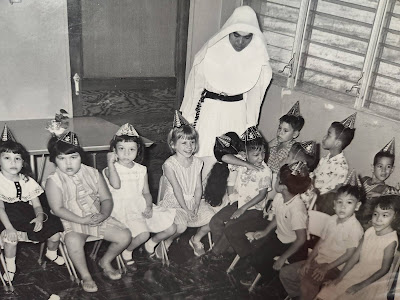 Religion, of course, played a big role in the daily program at the nursery. Basic prayers were taught, as were religious songs, and many of them were in Chamorro. A number of parents were attracted to sending their children to Infant of Prague for this reason; to learn prayers and hymns and also in Chamorro. Religion was reinforced with devotional acts, like May Crownings, and through religious plays.
The children never went hungry. If a child wasn't given a lunch pail from home, the Sisters had an endless supply of Ichiban (ramen) noodles. Some of the Sisters who baked also treated the children with their cakes and other pastries.
So well-cared for were the children that even when parents forgot to pick up their child at the end of the day, they didn't panic when they remembered or got a call from the nursery. Their child was in good hands with the Sisters. One auntie was asked to take the child to the nursery and so she dropped him off, not realizing that the day was a public holiday and there was no school. The convent was just up the hill and a Sister called the parents to come fetch the child.
Many more nurseries and day care centers have popped up all over Guam now, but Infant of Prague is the first. Many of Guam's leaders in every type of career and profession got their first taste of school at Infant of Prague. The nursery is still going strong; full of children, with the Sisters and lay teachers continuing the mission of caring for the children, spiritually and in every other way.
WHO IS THE INFANT OF PRAGUE? 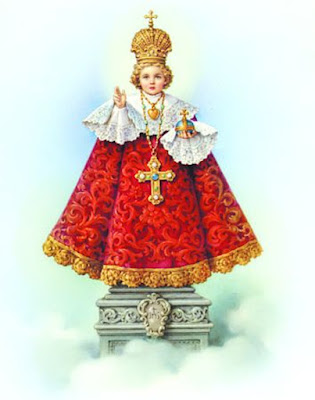 The Infant of Prague is a statue of the child Jesus which is venerated in the city of Prague in the Czech Republic. It has many claims of miraculous episodes in its history. The devotion was very popular in America in the 1950s when the nursery on Guam was established.
Posted by paleric at 7:50 AM

Email ThisBlogThis!Share to TwitterShare to FacebookShare to Pinterest
Labels: Eskuela/Schools