The above is a photo of the inside of the Hagåtña church around the year 1900. Notice anything?
NO PEWS.
You see some benches, but there are curious things about these benches.
First, there are too few benches to seat the entire congregation, at a time in history when that church would be filled to capacity on Sundays. Even on weekdays, there were large crowds at Mass. Secondly, the benches are not facing the sanctuary (altar space). Thirdly, the benches are not uniform. They look as if they were obtained from different sources, at different times perhaps. Lastly, the benches have no kneelers. Everyone knelt on the floor, or remained seated/standing if you were unable to kneel due to old age or infirmity.
PEWS ARE A "NEW" THING 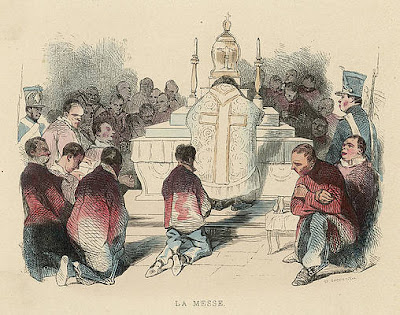 MEN KNEELING OR STANDING AT MASS
No pews, no seats
People might be surprised to find out that pews are a "new" thing in the Church. When a Church is 2000 years old, as is the Catholic Church, "new" doesn't mean last year. "New" can mean 500 years ago. That's still "new" compared to 1500 years before that.
In the ancient Church, people stood and knelt. There was no idea that one was to be "comfortable" attending Mass. One stood at some parts of the Mass, and one knelt at other parts of the Mass. Standing was a posture of respectful attention, and kneeling was a posture of adoration, humility and sorrow.
Of course some people found it a physical challenge to do either, to stand or to kneel for long or for any length of time at all. The old and infirm who could not stand or kneel often didn't come to Mass, then, since they were excused on account of their situation. If they came to Mass, they could sit on stools or chairs. Some of them brought their own if the church didn't have enough or any at all.

GARAPAN'S PEWLESS CHURCH IN SAIPAN AROUND 1900
Just a few benches facing each other
By and by, people who could afford to buy or have made their own benches brought them to church. Not everyone had the money or lumber to do that. But in time the people who did bring their own benches left them in the church, rather than carry them back and forth each Sunday.
As time went on, more and more people began to think everyone should be able to sit during some parts of the Mass and that pews should be available for everyone. Providing pews for everyone meant an additional expense for the church, and I imagine that's why our churches in the Marianas were without pews at least some of the time, as evidenced in the photo at the top.
Some churches did without pews for practical reasons, too. In this photo of the Catholic Church's headquarters, so to speak, Saint Peter's in the Vatican, benches and chairs are brought out only when needed. Otherwise the church is laid bare, as seen in the photo. Too many things happen in the Basilica and permanent pews would limit the movement of the different things that go on inside. 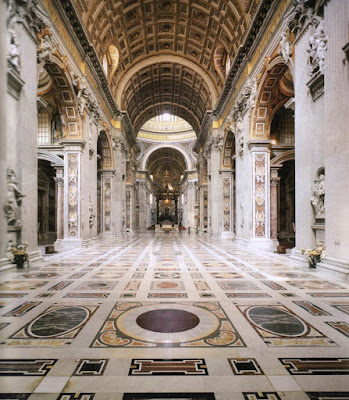 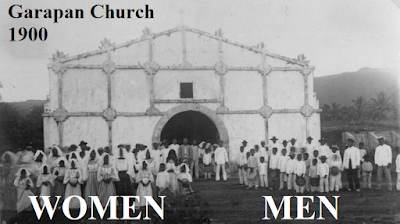 If you notice in this photo of the Garapan Church in Saipan around the year 1900, all the women are in one group on the left, and all the men are separate in their own groupings behind the women and more on the right of the photo.
This reminds us of the fact that Church Law in the old days recommended that men sit (or kneel/stand) on one side of the church (if there was a statue of Saint Joseph, usually on the right, then in front of him) and the women on the opposite side (if there was a statue of Mary, usually on the left, then in front of her).
This custom was codified in the 1917 Code of Canon Law (Church Law) which said, in Canon 1262 (1) : "It is desirable that, in harmony with ancient Church order, the women in church be separated from the men."
This was not a strict rule, but it was recommended. Thus it was not always followed. It depended on the priest at the time or on the custom of the place. The current Canon Law of the Church says nothing about men and women occupying opposite sides of the church.
PEW RENTAL OR ASSIGNED PEWS 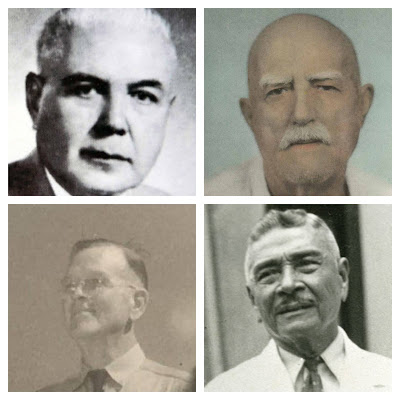 PEDRO MARTÍNEZ, PASCUAL ARTERO, JOSÉ TORRES AND JAMES UNDERWOOD
Clockwise beginning with top left
One way for churches to cover the expense of providing pews in church was to rent out the front pews to whoever was willing to pay the rent. This rent ensured that that family got to sit in that pew. Pew rents were a thing in some Protestant churches, as well, in the old days.

PEW RENT INCOME
in a Protestant church in the US in 1897
I am not sure this was done in Guam, but what I do know for certain is that four prominent families had the right to sit in the first two pews on either side of the center aisle in the Hagåtña Cathedral before the war. Whether they paid a rental fee for this or not, I do not know. These four families were already such big financial contributors to the Church that I wouldn't be surprised if there was no fee at all.
The four families were those of Pedro Pangelinan Martínez, Pascual Sáez Artero, José Martínez Torres and James Holland Underwood. All four men, and sometimes their wives, were very active in supporting the Church. They all had some financial means, from businesses, ranches or government positions. Martínez and Underwood were brothers-in-law. Underwood had been raised a Baptist in his native North Carolina, but became Catholic when marrying his Chamorro wife. Artero was a Spaniard, close to the Spanish priests before the war. Torres was a merchant, a musician and related to Pedro Martínez and Martínez's wife.
Four families, four pews; the first two on either the left or right of the main aisle.
I don't think this was done in the other churches of Guam or the other islands of the Marianas. And, after the war, the custom was discontinued in the Hagåtña Cathedral, which was destroyed anyway during the American bombardment of 1944 and wasn't rebuilt till 1959.
At the time, no one made an issue of the privilege of sitting in the front pews going to certain families. And I think the newer generations of those same families wouldn't want the custom to be revived. Even pew rents, which did cause bad feelings in the past, were discontinued many years ago as people's thinking changed.
TODAY MAY NOT BE ANY BETTER

It is always a temptation to think our times are better than the past.
But if we point fingers at the past when sitting up front in church, in a few cases, was reserved for the few, think about our modern mindset where some people choose what church to go to based on how cold the church air conditioning is.
The more things change, the more they stay the same.
Posted by paleric at 4:19 PM