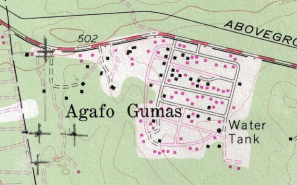 Most people don't even think twice about the name AGAFA GUMAS. It's just a name, and of a place that is somewhat out of the way for most people. It's way up north. So north it's even past Yigo Church.
Some people think the name sounds funny. As if trying to be Chamorro but not quite getting there.
The fact is, AGAFA GUMAS is not a Chamorro name, and it's not the local name for that location. There was no name Agafa Gumas until 1946, and in fact it was Agafo, not Agafa at first.
According to a military wife living in Agafo Gumas in 1946, Colonel Douglas Pamplin, who lived two houses down from her in Agafo Gumas, was the one who came up with the name. Agafo stands for Army Garrison Force and Gumas is an American corruption of the Chamorro word guma' which means house or houses. We do not add an S to Chamorro words to make them plural.
Army GArrison FOrce
So, if the military wife's story is accurate, Agafo Gumas was Pamplin's attempt to say, in Chamorro, AGAFO HOUSES, or maybe HOUSING.
The problem is, from a Chamorro standpoint, gumas is not a Chamorro word. A house or two or a thousand houses, in Chamorro, are still just guma'. No S.
But, lest we be too hard on Pamplin, look at all the younger generations of Chamorros on Guam who say things like
MAN ÅMKOS, when it should be MAN ÅMKO'
CHE'LUS, when it should be MAÑE'LU
SAINAS, when it should be MAÑAINA
Americanization has made its mark!
So the area was Army housing in the military heyday at the end of World War II and right after it. The military wife talks about jeeps and jeeps and more jeeps. The area was surrounded by roads leading to military bases, and military traffic was endless on those roads. Trucks and bulldozers made noise all day, as well as other machinery used in construction. Guam was being built into a fortress.
There was a mess hall and an Officers Club.
FROM AGAFO TO AGAFA
As early as 1949, it was being called Agafa Gumas instead of Agafo Gumas. A newspaper article about the wedding of a military couple whose reception was at the Officers Club there called it Agafa, not Agafo, Gumas.
It was just easier to say, I imagine. Keep it all the same vowel.
Language is in the mouths of the speaker, and not all mouths were created equal.
There are even those who call it AGAFU Gumas, with a U. 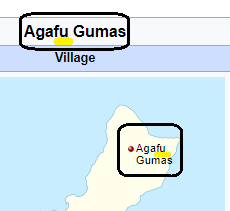 TURNED OVER TO GOV GUAM

1966
At some point, the Army didn't need housing in Guam anymore and the land in Agafa Gumas was turned over to the Department of the Interior.
They, in turn, handed it over to the Government of Guam. In 1966, the Department of Land Management made the former military lots at Agafa Gumas available for lease or purchase, and local residents began moving into the area. In time a Catholic chapel (Santa Bernadita) was built by the people and recently a new concrete church there has become a parish church.
SEEKING A LOCAL IDENTITY
As the Agafa Gumas community kept expanding, and as people wondered more and more about the name, people began to think about dropping the name Agafa Gumas. A growing community was looking for an identity, and name, they could be more comfortable with.
First of all, the Army Garrison Force is there no more and hasn't been for a long time. Second, it's not the actual, Chamorro name for the area. Third, it's not a Chamorro name for anything. Fourth, the name actually uses a Chamorro word badly (gumas).
So some people say the Chamorro name for Agafa Gumas is Machananao. In fact, they named the public school right next to the Santa Bernadita Church Machananao Elementary School, and underneath the school name the location - Machananao.
But other people wonder, "Is it Machananao? Or Machanao?" And other people wonder, "Isn't Machanao/Machananao in another place?" Pre-war maps of Guam seem to indicate that Machanao/Machananao was further north of Agafa Gumas.
So, we'll have to investigate more and write another blog post just on Machananao/Machanao. 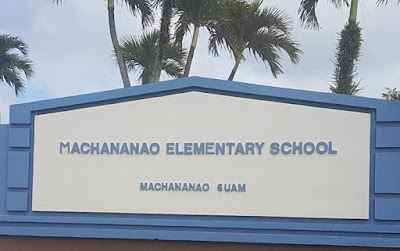