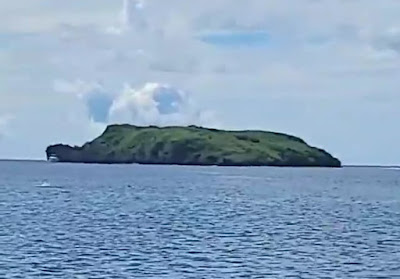 It certainly looks like a turtle, but no one called it that till modern times.

People in the recent past looked at the island and called it Turtle Rock. In Chamorro, that would be Åcho' Haggan, or maybe Isletan Haggan (Turtle Islet). There is only one reference to Turtle Rock in the Pacific Daily News in the 1970s, and none in the 1950s and 60s. We'd have to check the prewar Guam Recorder and other prewar literature to see if there was anything called Turtle Rock, but I'm skeptical. So it seems the name "Turtle Rock" became standard only after the war.

So what did the Chamorros call this island or rock?
NIHI 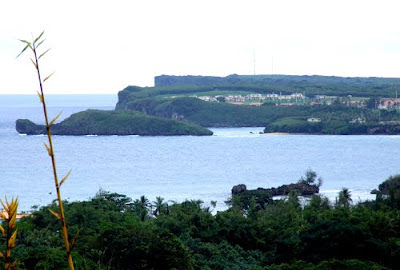 Two older people, one from Hågat and the other from Sumay, told me that, in Chamorro, the rock is called Nihi.

Perhaps, then, Åcho’ Nihi (Nihi Rock) or Isletan Nihi (Nihi Islet). I have no idea if Nihi is the same as the Chamorro word nihi which means “let’s.” Or, if the name Nihi comes from another source.

But Nihi is what these two elders, both just recently deceased, heard their parents and elders call it before the war. They were Art Toves from Hågat and Marian Babauta from Sumay (Santa Rita). U såga gi minahgong. Thank God I asked them before they passed, because other Hågat and Sumay people, even around their age, couldn’t remember the Chamorro name, but they did.
Both were born before the war; Art in 1928 so he was a teenager when the war broke out, and Marian in 1935, but being from those two villages they saw Turtle Rock every day and their parents, elders and fellow villagers would have mentioned the island in their youth using the local name.
NEYE ISLAND 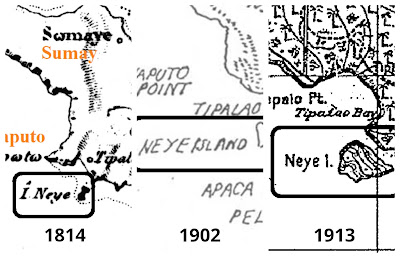 Just to complicate things, for two hundred years, possibly more, old maps said that Turtle Rock was called NEYE ISLAND.
We have maps above from 1814 by the Frenchman de Freycinet, and two US Navy maps from 1902 and 1913 that all call Turtle Rock Neye Island.
But when I asked Art Toves and Marian Babauta if they had ever heard of a Neye Island, I might as well have been talking Ancient Greek to them. Neye Island was totally unknown to them.
Obviously, then, the name Neye was known only to non-Chamorro map makers who copied older maps. The oldest of the bunch, from 1814, was done by Frenchmen, who spelled Chamorro names the way it sounded to their French ears. You can see that they spelled Sumay Soumaye, and Haputo is spelled Apoutou. The small W-looking letter is an old form of OU, which in French sounds like English OO. Bonjour sounds like BON - ZHOOR.
Could Neye be a French rendering of Nihi? Who knows? And if an older Spanish map called it Nihi, it would have been spelled NIJI, with a J.  The reason for this is because, in Spanish, the H in Nihi would have been silent. When we say "hi" in Spanish we say "Hola!" but it sounds like "Ola!" The H is never voiced. But, in Spanish, a J before a vowel sounds like a voiced H. Think of José and Juan.
I can just imagine someone seeing NIJI and mistakenly writing down NEYE. And on and on the mistake is continued in newer maps, made by people who didn't even live here.
I'd be looking for even older maps to see what they call Turtle Rock.
FUÑA 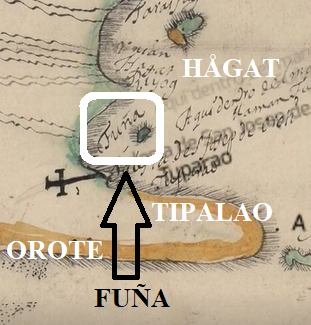 Funny I should say that because there is an older map, from 1676, that calls a rock or a small island off the coast of either Hågat or the Orote Peninsula FUÑA.
What if Fuña is Nihi (Turtle Rock)?
It's possible, and we shouldn't be surprised if later on people stopped calling it Fuña and called it Nihi instead. The names of places don't always stay the same over the many years. That happens all over the world.
Was Fuña the same islet as Nihi (Turtle Rock)? Like many things in Guam or Marianas history, it's hard to say. It's always good to have hard evidence for the things we say are true, and many times hard evidence has disappeared through the passage of time.
WORLD WAR TWO During World War II, the Japanese suspected that the Americans might land at Hågat's beaches, as well as at other spots. They used Turtle Rock as a natural blockage of the view of the artillery the Japanese had on the shore behind the Rock. The Americans were irritated that they couldn't see the position of those Japanese guns firing at them, flying above Turtle Rock and landing on the Americans. There were a few Japanese guns on Turtle Rock itself, too.
All along these waters are many remnants of wartime armaments and machinery dumped into the ocean when the war was over.
Today, divers go out to Turtle Rock where they, amusingly, find turtles to play with.
But, if you venture out to Nihi Island, just remember that turtles are not the only critters in the ocean. Just west of Turtle Rock is the Shark Pit.
Posted by paleric at 6:55 AM