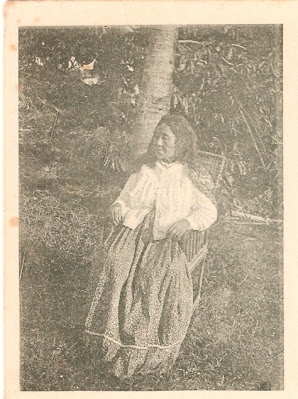 A Chamorro in Yap
BARTOLA GARRIDO
We had mentioned in an earlier post that several hundred Chamorros lived in Yap until 1947.  They had started to move there during Spanish times, from about the 1880s on.  But the first Chamorro who moved there, that we know of, was the lady pictured above - Bartola Garrido.

She presents something of a mystery.  First of all, in the records, she goes by different last names.  But the vast majority of citations call her Garrido, or Garrido y Taisague (meaning her mother's last name was Taisague).  But in other citations she is called Bartola Taisipic y Delgado.  We'll just call her Bartola Garrido.  At least that's how she signed her name, as can be seen in some Spanish documents.

The reason for her move to Yap is tied up with her male suitor, the American Crayton Philo Holcomb.  Holcomb was one of those entrepreneurs with a boat who tried every which way to make money in the Pacific.  Holcomb knew practically every island in the Pacific where money could be made, from Tahiti to Borneo.  Bartola was on a ship that got lost, only to be rescued by Holcomb, who persuaded her to move with him to Yap in 1875.  Holcomb named a schooner of his after his sweetheart.

BARTOLA GARRIDO
listed as a passenger out of Honolulu in 1872

Yap was not yet under Spanish (or any other foreign) colonial rule, but the Germans and the Spaniards were soon to compete over that issue.  Bartola and Holcomb supported Spanish rule and wrote declarations of that support.  Bartola did her part to try and convince the Yapese chiefs to also support Spanish rule.  It is said that when the Germans raised their flag on Yap, Bartola raised the Spanish flag.

When the Spaniards finally did set up a colonial government in Yap in 1886, Bartola's loyalty to Spain was rewarded.  For the next 13 years or so, she was the government interpreter and was paid handsomely for that service; 600 pesos a year (a government clerk in Yap was paid just 150 pesos a year).  It is said that Bartola helped recruit Chamorros to come to Yap in the 1880s and 90s to teach and to otherwise settle on the island.  Her house was used in the early days of Spanish rule as a school.

Holcomb was already dead in 1885, killed by islanders in the New Ireland area of Papua New Guinea.  But Bartola remained in Yap till her death, well into the 20th century.  She had her own estate in Yap, as can be seen on the map below.  Her grave site today is unknown.


To this day in Yap there is a place called "Chamorro Bay."
Posted by paleric at 12:42 AM