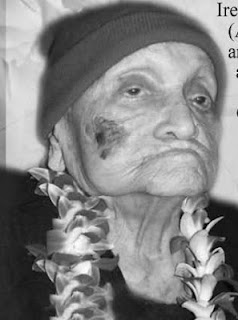 She lived till just about two months shy of her 103rd birthday.

Maria Naputi Mantanoña, better known as Ama, was the mother of 12 children, and outlived 8 of them.  She lived in the village of Inalåhan.

She had so many children that her younger sister helped raise some of them.

Her husband Pedro was remarkable in that he did the cooking when he came home from work, and also the laundry, in order to spare his wife those chores.  She had more than enough work tending to a dozen children.

She was a good seamstress and would never throw any fabric or clothing away. "Mungnga ma yute' i matitek na magagu-mo!" she would say. "Don't throw away you torn clothes!"  She would mend them over and over again, no matter how old they were.

Her husband was somewhat glad she had much work to do indoors.  He preferred that she not leave the house much, as she was a beautiful woman!

She was fond of novenas and held several of them throughout the year.  She taught her daughters and nieces to pray to Santa Maria for themselves; to San Jose for their husbands, especially to find work; and to the Niño Jesus (Infant Jesus) for their children.

December 8 (the Immaculate Conception) was her biggest devotion and she would call all the family to the nobena at her house nine days prior, and to arrive between 5 and 6pm.

She lead that devotion all the way into her 90s.  But eventually she made her younger sister lead the nobena and then, after her, she taught her even younger niece how to lead it.  How else would the devotion stay alive in the family after she had died?