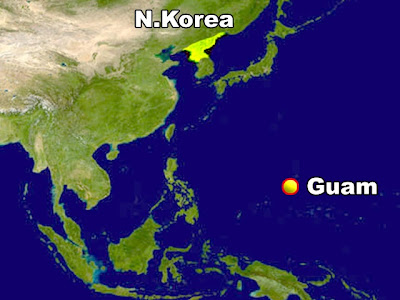 Jose had a bit too much to drink at the family BBQ and decided to call up Kim Jong-un, the supreme leader of North Korea.

"Mr. Kim," he says, "we on Guam have decided we're not going to wait to see if your threats are real or not.  We've just declared war on you."

Kim asks Jose, "How many troops do you have?"

Jose looks around and says, "Well, there's me, and my cousin Ankie, and my neighbor si Big Ben, three dudes from GPA and the whole fire station crew from down the street.  That makes 11 of us."

Jose says, "Sus Maria!  I gotta get back to you then."

The next day Jose calls up Kim and says, "The war is still on.  We lucked out and got ourselves some armored vehicles."

"And what would that be?" asks Kim.

Jose says, "My brother's tractor, the village mayor's Ram pickup truck and a bulldozer we found at an abandoned construction site."

The next day, Jose calls and says, "The war's still on, we got ourselves a navy!"

"And what does this navy have?" asks Kim.

"Two fishing boats from the boat basin, five jet ski boats from my cousin's business and a tug boat they're no longer using at Commercial Port."

The following day, Jose calls and says, "Mr. Kim, sorry but the war is off."

Kim says, "Sorry to hear that.  But why the sudden change of plans?"

Jose says, "Well, we had another BBQ and discussed this seriously over flank steak kelaguen and beer, and there's just no way we on Guam can house and feed 200,000 North Korean prisoners!"
Posted by paleric at 11:08 PM

Email ThisBlogThis!Share to TwitterShare to FacebookShare to Pinterest
Labels: E'sitan/Humor