During a construction project in Hagåtña in 1972, workers discovered a prewar well.

Sixty years before that, we would have seen many wells all over Hagåtña.

Before the Naval Government made available a modern water supply system, there were only THREE WAYS the people of Hagåtña got fresh water :

Luckily, a river flowed right through the heart of the city, starting at the spring (Måtan Hånom) to the east in the Dedigue area and moving right through the capital till it emptied into the sea at the entrance of Aniguak. But the river water was never used for drinking. People did the laundry in the river. Animals did their business there, too, and all kinds of pollutants made river water dangerous to drink.

The Fonte River was untouched by human activity but one had to walk half a mile or more to Fonte with your water containers. It was done, but Fonte was never a major source of water for Hagåtña in the old days.

This is the water most people drank in those days. The custom was to place large containers, wood, clay and less frequently metal, under the eaves of roofs and catch the rain water. The problem was the dry season. Stored water would eventually dry up if it didn't rain at all for a while. Most times it rained even just a bit during the dry season, but sometimes it did not. 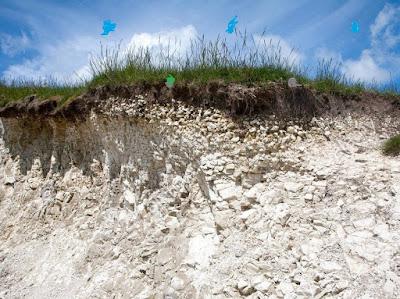 Hagåtña sits on limestone soil, pictured above. The good thing about limestone soil is that it allows rain water to percolate down into the ground till it forms an underground lake. Dig a well and you can tap into that subterranean lake.

The bad thing about limestone soil is that the rain water picks up the chalky, white dust of the limestone. You dig a well and find water, but it is chalky, heavy and brackish. If you put well water into a clear glass, you will see a cloudy, dull gray liquid. Keep drinking that chalky water and in time you might develop kidney stones, among other potential problems.

The other, more serious problem with limestone soil is that rain water that falls on contaminated soil will carry those impurities down to the underground lake. Animals of all sorts lived in Hagåtña, around houses and even under houses. Those animals used the bathroom right on the ground, so fecal matter and urine seeped into the soil and into the underground lake.

Besides animal waste, there was also no indoor plumbing, so people also went to the bathroom outside but in the privacy of outhouses. Still, all that human waste also seeped into the ground. All kinds of waste water was thrown out on the ground.

So people avoided drinking well water as much as possible. But enough people resorted to drinking well water for government officials, both Spanish and American, to complain that Hagåtña's wells were contaminated and people were getting sick with dysentery and other diseases.
If you shouldn't drink well water, why dig a well in the first place? Well water was used for almost everything else, then. Washing the body, pots and pans; watering plants; general cleaning and even the laundry if you wanted to skip the river. Some cooking might be done with well water, depending on the dish. Although even the animals could get sick from contaminated well water, that was the drinking source many times. As mentioned, even people at times gave in and drank well water. 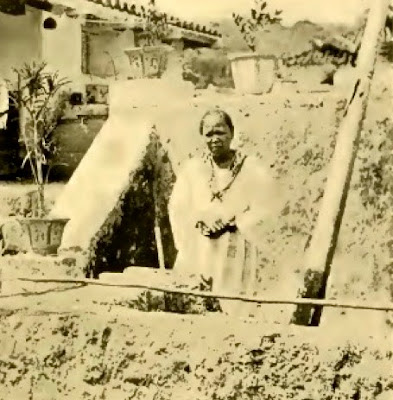 Hagåtña woman in front of a well
THE 1972 DISCOVERY
The well discovered, unintentionally, in 1972 was 4 and 3/4 feet deep from the surface of the ground at the time the well was being used, which was four feet lower than the ground surface in 1972. That's why archaeologists are always digging! The surface of the ground is always growing higher and the older keeps getting buried deeper below.
Three sides of the well were expertly lined with chiseled rock, to prevent the chalky limestone from affecting the water as much as possible. Stone steps were placed on the fourth side to allow someone to descend into the well and fill a bucket with water.
I don't know how the construction project could have gone on and still save the well as a relic of the past, but the well was covered over and construction went on as usual.

PREWAR LOCATION OF THE WELL
The well was located on the border between lots 385 and 383, those lots being owned by Juan Díaz Torres and María Aflague Castro respectively, in the barrio of San Ignacio, in between Maria Ana de Austria and Pavia streets. Today, this is the Pedro's Plaza area west of the Hagåtña GPD precinct. The well could have been used by both houses, and maybe even by other neighbors. 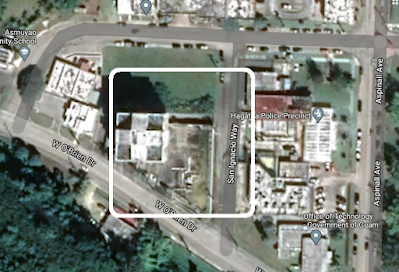 WELL LOCATION TODAY
Posted by paleric at 11:42 AM