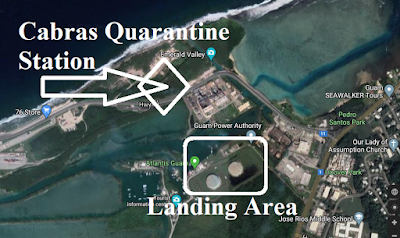 
Not only did we have a word for QUARANTINE in the old days, we also had a place for it.

Due to the Coronavirus (Covid-19) situation on Guam, some incoming passengers to the island will have to undergo mandatory quarantine, while others will have to self-isolate at home.

The English word quarantine comes from the Italian word for "forty," quaranta. Because of the Black Death, the port city of Venice in Italy mandated a waiting period of forty days for newcomers to enter the city. It was believed forty days were enough for a disease to manifest in the person, who would then not be allowed in and infect others. For forty days, the person had to stay on the ship or reside temporarily at a nearby residence by the port, but still outside the city proper.

So from the Italian word for "forty," quaranta, we get the English word quarantine.

Well, since we were under the Spanish, we used the Spanish word for it - cuarentena, and in Chamorro with a K - KUARENTENA. 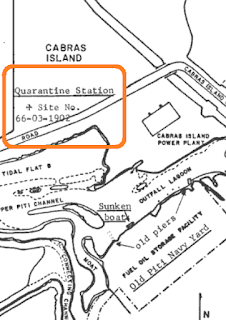 Some people ask why we call it Cabras ISLAND when it doesn't look like an island. It seems connected to Piti.

Now it is, by a man-made bridge. But, in the old days, Cabras was really an island, unconnected to the main island of Guam and completely surrounded by water on all sides.

Thus, being so close to the landing pier at Punta Piti, where passengers and cargo who arrived into Apra Harbor landed, and yet separated by water, Cabras Island was a perfect place for a quarantine station where passengers suspected of having some disease could reside until they were all cleared, or had to get back on the ship and never land.

In 1910, the German head of the Catholic Mission of the Marianas, which at the time included Guam, was not allowed to even step foot on Guam by the American Navy, so he had to hang out for a brief time at the Cabras Quarantine Station till he found a ride up to Saipan. Rome had put Guam under the rule of German priests, but the Spanish-attached Chamorro people of Guam and the American Navy did not want German priests here. 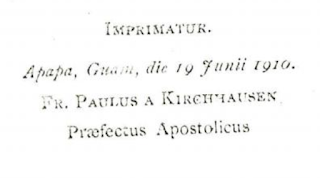 His name was Father Paulus of Kirchhausen, and you can see in the picture above he gave permission ("Imprimatur") for the publication of a Catholic book for use in the Marianas on June 19, 1910 writing from Apapa, the Chamorro name for Cabras Island, where he was in detention at the Quarantine Station till he was forced to go back to Saipan. 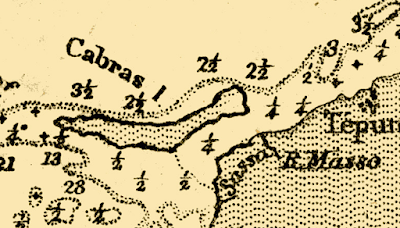 CABRAS IN 1900
Notice, not connected to the main island
Posted by paleric at 12:52 PM