HOW WE MADE MONEY


Before the modern age of salaries and minimum wages, how did many of our people make money?

If you're 50 years or older, you remember the almost daily voice of children going door-to-door in the village selling food made by their mothers or grandmothers : empanåda, donuts, buchi buchi and a dozen more things.

But in the old days, besides selling ready-made food or products, our people sold raw materials; things more or less in their natural state.

Just to give you an idea, the following is taken from statements made in court by witnesses about how they earned some cash in the early 1900s. Things sold included some products using human skill, and many things just from mother nature.

Manuel, a single man still in his early 20s, sold the following, sometimes partnering with his father :

Copra - the dried meat of the coconut. This was, depending on the period, in high demand. It was the oil contained therein that was marketable. The oil was used in cosmetics, soaps, candles, cooking and many other purposes. Agents, often Japanese, would buy from local farmers and send off to Japan and elsewhere. Copra was a great money-maker for even the poorest Chamorro in those days. At other times, for different reasons such as over-production, the price of copra fell on the world market and local producers were less inclined to make copra.

Corn - the main staple of the Marianas until imported rice overtook it. It was mainly used to make titiyas but could be made into soups and other dishes.

Mañåhak - the juvenile rabbit fish. This fish was seasonal but in great demand. It was prepared in several ways and could be eaten whole without worrying about the tiny bones. 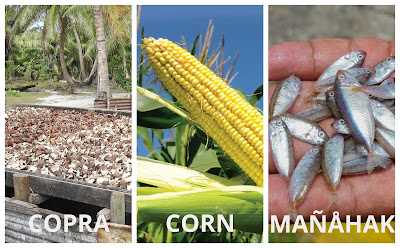 Marcela, just 16 years old, being smaller in frame, sold things she was better suited to make or harvest.

Rope - Our islands had the resources to make ropes and cords locally. Fibers from the coconut tree or from the pågo (wild hibiscus) plant, besides other plants, were used. Her older sister and sometimes her brother would help her operate the crank which twisted the fiber strands into rope. Marcela sometimes sold the fibers alone and let the buyer make the rope him or herself.

Fadang - The nuts of this plant are so poisonous that one has to soak them in water and change the water repeatedly to get the poison out. If chickens drink the first water thrown out, they will die! Despite this danger, and the inferior flavor compared to corn and other foods, our elders used fadang to grind into a flour and then make titiyas when nothing else was available. The flour could also be used as a starch but it wasn't very white and its odor was not pleasant to most people. The flour could be made wet and used as a paste. To give you an idea how offensive fadang is, when used as a paste the insects would avoid the area where it was smeared.

Asiento (starch) - Starch can be made from a number of plants in the Marianas, but the most favored was gapgap. It produced a brilliant white starch. A white shirt was starched splendidly using gapgap. But starch could also be obtained from mendioka (tapioca) and other sources.

Dukduk - A variety of breadfruit.

Huto - These are the seeds of the dukduk tree and were boiled or roasted as a snack. Cooks of old prized the oil from these seeds.

Lemmai - Or breadfruit. When in season it was eaten in abundance in a variety of ways. It was cut into chips and dried (essok) for storage to enjoy it when the lemmai season was over.

Asiga (salt) - Families living near the sea could send the kids to bring home buckets of salt water, the further away from the beach the better. This was boiled to evaporate the water (the slower the boil the better) and leave behind the salt residue. This was then left out in the sun to bleach it as white as possible. Then the salt could be sold to families who, for whatever reason, couldn't make their own. It was used not only in cooking; it was also used to preserve meat.

Washing - Besides selling things obtained from the land, some of our female elders made money by washing people's laundry. A washerwoman was called a labandera, from the Spanish word for the same thing. Washing could be done at home or in the river or in the few public water troughs built by the Spaniards. Drying (ma tåla) could be done by spreading the clothes out on palm branches or woven mats put on wooden platforms or hung on a line. Ironing could be done using a charcoal-filled iron, using starch made from local plants. Some labandera were "under contract" to wash the clothes weekly of some American military officers. 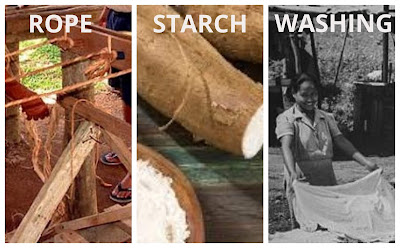