A TASTE OF THE OCCUPATION 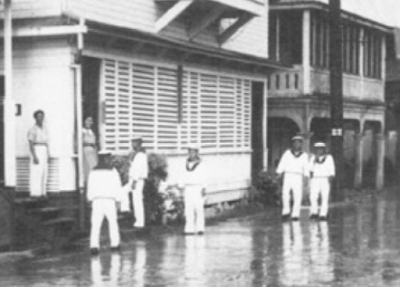 JAPANESE SAILORS IN HAGÅTÑA
during the Occupation 1942 or 1943


Some of the very hardships we are enduring now that the corona virus has made its appearance on Guam are the same hardships our elders endured during the Japanese Occupation (December 1941 to July 1944).

But the hardships may surprise you.

What we call "history" is often myth; a mixture of truth and untruth.

One such myth of the Japanese Occupation is that it was all misery and torture, starvation and massacre.

As many an elder who went through the Occupation told me, "The worst part was the beginning and the end. The big middle was okay."

And it should make sense. When the Japanese first took over the island and then later when they struggled to keep the island, that's when the Japanese were the most brutal. But once the island was completely theirs and the nearest American was thousand of miles away, the Japanese could relax. They were human, too, and wanted to have as stress-free a day as possible and enjoy life. And when the Japanese relaxed, the Chamorro could, too. To some extent.

And so, one elder, who was 14 or 15 years old during the Occupation, said to me, "The hardest thing for us about the Japanese Occupation was the BOREDOM." 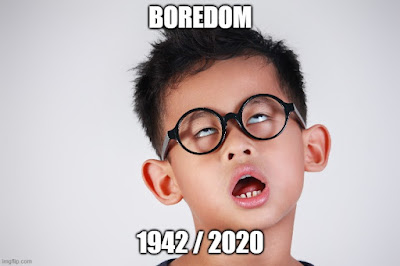 Doesn't that sound like a lot of what we're facing now? As schools are closed? When people avoid the movies? As Tumon is a ghost town?

This lady who told me about the boredom of the Occupation knew first-hand the miseries of war. She and her teenage sisters were physically and sexually abused by Japanese guards at Mañenggon. Her mother was an emotional mess worrying that her daughters would be raped (they weren't). Her younger brother got hit by American shrapnel and almost lost his foot. But that was at the end of the Occupation, she says, when the Japanese went crazy knowing they were going to die. But for all of 1942 and 1943, the main difficulty she said was boredom.

Here are three of those difficulties in a bit more detail :

The people were free to practice their religious devotions at home, but what the people really missed was Mass. Although Fathers Dueñas and Calvo said daily Mass, their Masses were not accessible to the majority. Father Dueñas said Mass mainly in Inarajan. Father Calvo said Mass mainly in his family chapel in Chochogo' in Toto. But this wasn't the same as the thousands who filled up the entire Hagåtña Cathedral, the large Santa Cruz church and all the smaller churches and chapels of Guam before the war.

The vast majority of people could not attend Mass at all for two and a half years, and they felt the sting of it. We're going through the same thing under the corona virus pandemic. Public Masses are suspended and many people feel the loss. 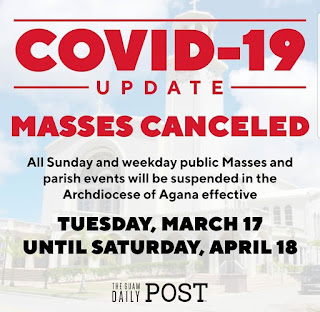 But it wasn't just Mass. It was the lack of interaction with the clergy and people. Church was also a setting which afforded social interaction. Various people were in charge of this or that. Techas lead the prayers. Lay teachers taught the catechism. People sang in the choir. Bachelors looked for their sweet hearts and tried to talk to them after Mass. Church was a key meeting point of many people on Guam. And it was gone for two and half years.

And it wasn't just Sunday Mass, or even just daily Mass. First Communions and Confirmations had to wait or were done without fanfare. Weddings were also celebrated with less festivity and fancy attire, if celebrated at all. Burials were done quickly and sometimes without the benefit of a priest.

Gone for that period were the fiestas that were observed with decorated arches and solemn processions, then by festive dinners in the homes.

Besides the absence of spiritual consolation, the lack of religious activities helped bring about great boredom for many people.

With a ban today on any gathering exceeding 50 persons, think of the implications for people wanting to celebrate funerals, death anniversaries, rosaries for the dead, christenings and so on. We face the same hardship as in 1942.

Nearly half the people living on Guam in 1941 resided in Hagåtña, a tightly compact city where some 10,000 people were squeezed in among houses, stores, bars, restaurants and offices. The capital was always busy with activity. To get anywhere inside the city, one just needed to walk. People were always visiting each other. Among the Naval officers and the local elite, parties and dinners, complete with live music and dancing, would be written up in the Guam Recorder monthly magazine.

The lady who told me about the boredom of the Occupation was from one such elite Chamorro family. She was used to going, even as a teenager, to dinners and parties where her influential father rubbed elbows with military brass and local statesiders who married Chamorro women. They dressed up, sang songs and danced. Stories, jokes and gossip took hours to relate.

That was mostly taken away during the Occupation. The military brass, of course, was deported but so were the local statesiders married to Chamorro wives. Even many of the elite Chamorros no longer had stores to run, since no goods were being shipped in to stock shelves. High ranking Chamorros sitting at desks in the American government were mostly now out of a job. So, almost all the local men, both high and low, had to survive by going back to the land and sea. People were too busy growing their food to carry on social events to the same extent they did before the war.

People had to be careful, too, about gathering in numbers or in circumstances that aroused Japanese suspicions. Ears and eyes were always on the lookout for anti-Japanese activities, real or imagined. With such fear and concern around, people didn't gather as much as they did before the war.

We're going through the same thing today. We're being told to keep three feet away from others, some even inside the same house. Gatherings of over 50 people are prohibited by the government. People aren't dropping by friends' homes for casual visits. And we've only just begun. Unless things change dramatically, we'll be sitting at home a lot for the next month. Now we know what the lady meant when she said boredom was the main difficulty of the Occupation. 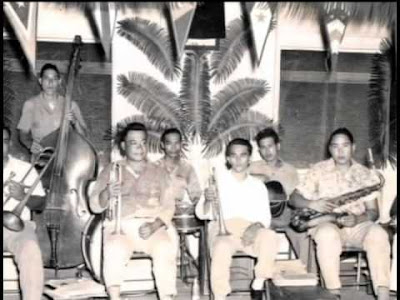 HEARD NO MORE
Social events, and the American music often played at them, mostly disappeared

3. SCHOOLS, BUT ONLY UP TO A POINT

Despite Japanese reports and statistics during the Occupation, Guam's children didn't get much schooling during that period.

Japanese reports state that schools were running and teaching roughly 80% of the same number of school kids as prewar times.

But the older people would have told you that any schooling they had during the Occupation was brief and passing.

Even the Japanese reports have to admit the fact that classes were mainly to teach the children basic Japanese vocabulary, with lots of singing, physical exercise and social etiquette involved.

Brighter students who seemed to learn Japanese quicker than others were selected to undergo more vigorous language training in order to become Japanese teachers themselves one day. These managed to pick up some good command of the language, but the majority of Guam's children remained as incapable of carrying on a full conversation in Japanese after the war as they were before the war.

Today, our school children have to stay at home, many of them complaining of the boredom. The difference now is that the older ones can still do their school work online. 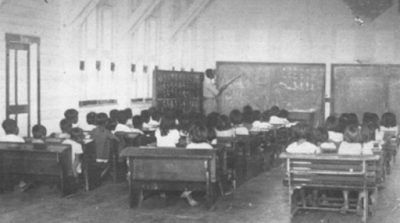 
So as we "suffer" endless hours mindlessly scrolling on our phones, or searching for more engaging videos on Youtube, let us remember, "This is what grandma went through in 1942." Except that she didn't have Youtube.

So when people say our crisis today is "unprecedented," that it's the worst we've ever been through, the point can be debated, but one thing remains clear. Our parents and grandparents went through the Japanese Occupation which, besides the whipping, rape and murders for a lot of our people, did include a whole lot of boredom. There is a precedence for what we're going through now. 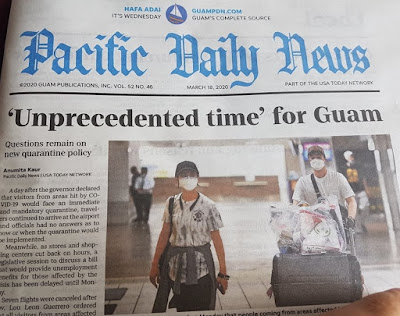