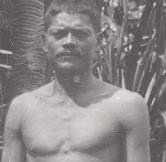 
There are three main clans of Lizamas in Saipan, known by their nicknames :

These are the earliest Lizamas to move from Guam to Saipan. Around 1893 or 1894, Vicente Cruz Lizama, from Hagåtña, Guam, and his wife Rosa Taisague Cabrera, also from Hagåtña, moved to Saipan. A son Antonio had already been born on Guam but Vicente and Rosa had many other children born on Saipan. These children in turn had many offspring and the Pilåkku' clan was well-established.

Vicente had a brother Antonio who also moved to Saipan but it seems he and his wife did not have children. Another brother of theirs, José, died in Saipan in 1895, apparently a bachelor.

This clan of Lizamas in Saipan was founded by Joaquín San Nicolás Lizama, pictured above. Joaquín was born in Guam, the son of José Lizama and María San Nicolás. At some point he moved to Saipan, where he got married in 1903 to Carmen Mendiola Mendiola, of the Damoa clan, which had both Guam and Luta (Rota) origins.

Joaquín and Carmen had almost a dozen children, so the Batittang clan spread.

I knew one of Joaquín's daughters who told me how her father was a kapitan in the sendålon Alemán (a captain among the German soldiers). What she meant was her father was one of the local men recruited by the Germans to be police officers in Saipan.

Joaquín also had two boats which he used for trade and fishing. His daughter said, "Ti in tingo' tenda," "We didn't know anything about stores, because my father always bought or traded things with the other boats."

The Pina'lek Lizama were the last of the three main clans to move to Saipan from Guam, making the move around 1915 or so.

Luís married a Naputi and Juan married a Crisóstomo, and their descendants continued the clan in Saipan.

Luís was an artillery man in the local insular force under the Americans in Guam in the early 1900s before he moved to Saipan.

The clan's nickname, Pina'lek, means "heartburn" in Chamorro. Why the clan is named that is something I have found no conclusive reasons for.

There was one other Lizama who moved from Guam and to Saipan, and she was actually there before the others.

Lucía Fausto Lizama, probably born in Guam and the daughter of Javier (also called Gabriel) and María was already in Saipan in the 1870s bearing children although she was not married. In time, she married the biological father of these children, José Acosta Arriola, and the children all became Arriolas.