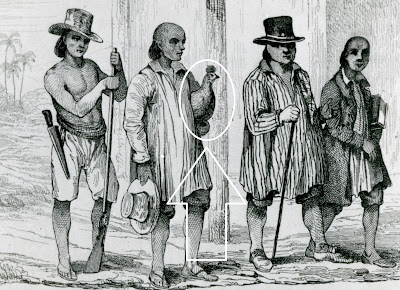 Where is this Chamorro guy above going? With his rooster under his arm? Accompanied by an armed man, what looks like a village head or gobernadorcillo, wearing a top hat and with staff in hand, and a clerk with record book in tow?

Well to the cockfight, of course! The gayera was a strong element of Chamorro colonial times under Spain.

A visitor to Guam in 1849 says this about the cockfight as he saw it. It is written in a style of English sometimes strange to our eyes or ears, so I have explanatory comments in parentheses and in italics :

"Between the government house (the palace or palåsyo) and the calaboose (prison), which stood directly opposite it, was a small grass plot (it must have been what we now call the Plaza de España), toward which we saw several parties of Spaniards as well as seamen, directing their steps, and we retraced ours. There we found active preparations going on for a cock-fight, some four or five cocks being already there, a small cord being tied to the leg of each, and at the other end a small peg which was driven in the ground, beside each cock stood its owner, descanting (speaking at length) upon its merits, and waiting for bets, previous to heeling (attaching blades to the heel) and matching them. 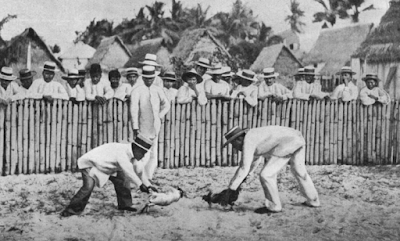 Within a few yards of the last, another group were seated gambling for money, at a game peculiarly their own, and they too, within one hundred yards of the church, and the sound of the little bell before the altar, which we distinctly heard.

Nearly every individual then was laboring under a severe attack of the influenza, which was raging fearfully and fatally upon the island; but neither death nor disease prevented them from practicing this cruel and brutal amusement as it is termed.

At four o'clock the services of the church were concluded, which was announced by the tinkling of the bell, when they immediately uncovered (their heads) and dropped on their knees, remaining in that position until the boxed (I can only assume he was being carried in a litter) priest and his retinue had passed, the game cocks standing proudly erect, as though conscious of their superiority to the degraded beings who knelt around them.

The procession having turned an angle of the government mansion, they sprang from their knees, adjusted their hats and proceeded to cock-fighting with as much nonchalance as a Broadway exquisite would sip his julep."

1. Cockfights were always held on Sundays after morning Mass. The church service the writer talks about having ended around 4PM was not Mass; it was Vespers and Benediction, always held in those days (in bigger churches) on Sunday afternoons. Mass in those days was always celebrated quite early; 4AM or 5AM. On Sundays, a second or third Mass was possible but none past 10AM.

2. The Sunday cockfight was THE social event of the Sunday, after church. People came out in large numbers. At times even the village priest attended the cockfight and sometimes even, if the writer was telling the truth, entered his own rooster in the contest! All this in opposition to church rules.

3. Chamorros in those Spanish times played different games of chance now forgotten, except for Tres Siette, remembered by a few. But other games were called paiket, tangga and panggengge. Games could involve cards, dice and other things.

4. The visitor happened to come the very same month a ship from Hawaii brought the flu to Guam, January of 1849, killing 200 people. His ship arrived on January 21 for three days, leaving on the 24th. Had the ship left the following day, the 25th, this visitor would have experienced one of the worst earthquakes the island had felt in a while. The church tower in Hagåtña even fell.

5. The writer speaks of a "boxed priest." Only one thing comes to my mind, to explain this curious phrase. People could be carried about in boxes carried on men's shoulders, called a litter or palanquin. 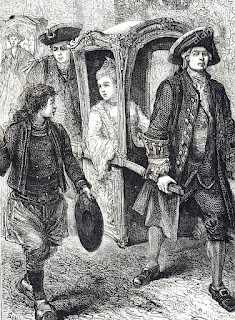